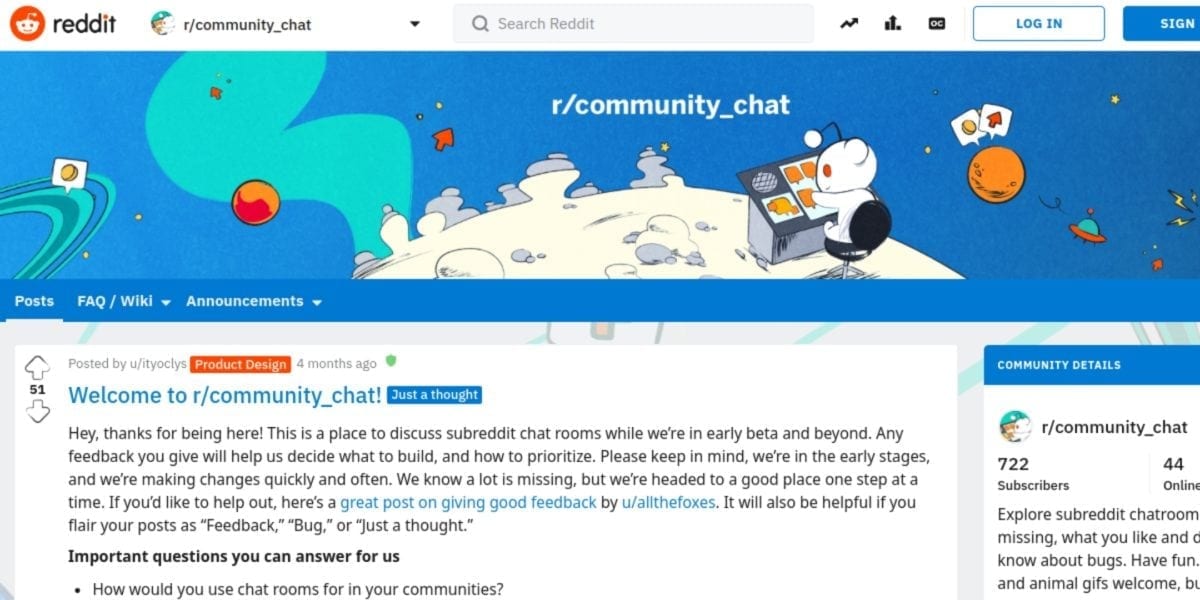 Reddit now offers live chat rooms organized by subreddit. This means Reddit users can join chat rooms of their choosing, and converse with people who share their interests. All without having to use the standard, and rather limiting, Reddit user interface.

You’ll either love or hate the standard Reddit UI. To regular users, it works well, even after the recent Reddit redesign. But for outsiders it looks like something from yesteryear. Which is why it’s rather fitting that Reddit is now adding chat rooms.

Reddit has been testing live chat rooms over the past year, but only in an exclusive, invite-only closed beta. However, its new chat rooms are now launching in full beta, and being released to more subreddits every day.

Redditors Need to Communicate in Realtime

According to Wired, the idea of hosting old-school chatrooms within Reddit grew out of the r/place experiment last April. This, for those of you who missed it, was a collaborative project which enabled Redditors to contribute to a giant mosaic.

While the experiment itself was a success, it showed the need for a place for Redditors to communicate in realtime. Because Reddit would obviously prefer its users to remain on Reddit than disappear off to Slack, Discord, or Facebook Messenger.

The answer is live chat rooms organized around subreddits. Moderators can create chat rooms for as many topics as they want, from general chat to niche interests. And users can join the ones they want in order to enjoy realtime conversations with fellow Redditors.

TL;DR: Your feedback helped us reshape the direction of chat on Reddit from one-to-one chat to private group chats and eventually to community-based chat rooms…

Chat rooms are now in beta and being released to more subreddits daily. More: https://t.co/dWQSo0oo3r

Reddit’s live chat rooms are definitely a word in progress, with Reddit working on notifications for @mentions, and an API for moderators to build subreddit-specific tools. But even at this early stage these feel like a worthy addition to the Reddit ecosystem.

If you haven’t yet succumbed to the lure of Reddit here’s our primer to your first day on Reddit, and our guide to using Reddit like an old pro. And once you’ve got used to the basics you might want to try posting something likely to hit the front page of Reddit.

#RethinkSchool: Flying Drones, Veterinary Care and a Chiropractic Clinic, All in a West Texas High School

Planning a Trip? Try Out These 6 Chrome...