Yi Smartphone Gimbal: Silky Smooth Footage, But Could Be Better 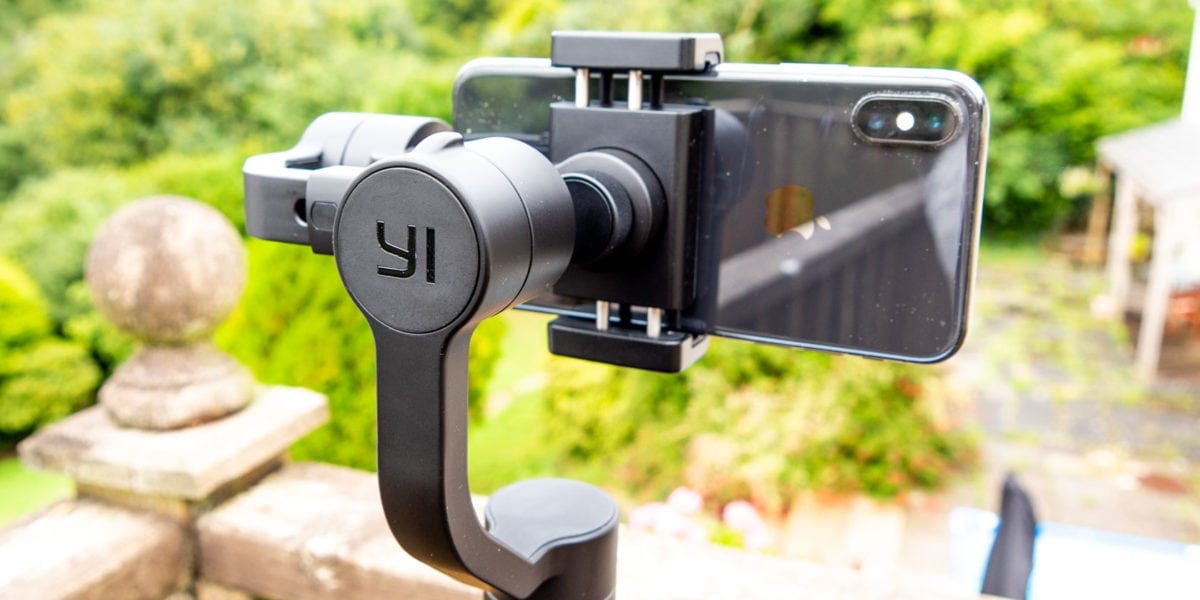 Our verdict of the Yi Smartphone Gimbal:
Makes silky smooth smartphone video accessible to all, but the offering is a bit barebones with no case included. If you can find it on sale for under $100, it’s a good entry point, but spend a little more and there are more feature packed devices on offer.710

The quality of smartphone videography has exploded in recent years, with the latest handsets able to record 4K video, in HDR or 60 frames per second. Unfortunately, our pathetic shakey human hands haven’t improved at nearly the same pace. While smartphones make some attempt at stabilizing your footage in software, nothing beats a hardware gimbal.

Yi Technology–reknowned for their Yi4K+ GoPro killer and superb quality budget dash cams–have turned their attention to the gimbal market. Today we’re taking a look at the Yi 3-axis Smartphone Gimbal, available now. And at the end of this review, we’re giving one away to one lucky reader. Read on to find out how to enter the competition.

What is a Gimbal?

Looking a little like a selfie stick, a handheld gimbal is actually a complex bit of machinery with fast acting motors and a gyroscope sensor. When you move the gimbal, the gyroscope senses the movement, and the motors move to cancel out the motion by moving in the opposite direction. In this way, the camera appears to remain static.

That’s the gist of it anyway, but there’s also different modes of operation that we’ll talk about later. It’s important to remember that a basic 3-axis gimbal can only stabilize rotational movement around an axis (twisting and spinning motions), not positional movement. So if you jump up and down, you’ll still see that reflected in the video. There are limits to how much a gimbal can stabilize for you, but essentially it’s going to somewhat improve everything you shoot. Design and Specs of The Yi 3-Axis Gimbal

In the box you’ll find:

Hardly worth formatting that as a list, was it? Notably, there’s no case included. Although the box it comes in has some nice foam padding you could carry it around it, once you’ve fitted the device to your phone, it won’t fit back into the box. You can find a generic gimbal case on Amazon for around $15, but it’s an added expense. Once paired with your smartphone, you’ll be able to use the shutter button to start/stop recording or take a photo in any camera app.

There are three buttons on the device, for Power, Mode, and Shutter; plus a flat joystick to manually control angle. The 3.5cm diameter, 18cm long stick makes up the grip of the device, though it’s a basic matt black ABS plastic with no particular grip texture. It does the job but in the most barebones way. On top sits the 3-axis stabilizer structure, housing three motors and a phone cradle. In total, it weighs 420g, or just under 15oz. The cradle should accommodate any phone from 54-86mm (2.1-3.4″) in width, which includes the “plus” size models (though you may need to remove a chunky case for those).

That said, a good fit depends a lot on your phone model. While my iPhone X worked great, the Sony Xperia XZ2 fared less well. With the power button situated just where the cradle clamps down on the phone, it was unusable when pushed flush to the end. I had to shift it a little more off-balance than it should be. On top of that, the camera sensor is closer to the center of the device, and would often capture the gimbal in the frame. So, it fits some phones better than others, and your experience may vary. Yi claims 8 hours of battery life, but in my testing I only got about half of that. It’s not bad, but you’ll get longer life with smaller phones due to less weight needing to be counteracted.

The Yi Gimbal has three modes, accessed by a single tap on the mode button.

The first is Pan mode. Here, both the tilt and roll are locked in place, while the pan (left and right) smoothly follows the motion of the stick. This is the easiest to get your head around if you’ve not used a gimbal before, and that’s probably why it’s the default when you turn the device on. It’s great for filming things that remain at a relatively static height to the camera, like people. The joystick controls the tilt in this mode, so you can set the angle if your subject is higher or lower.

The second is Lock mode. In this mode, everything is locked forward (or wherever you set it with the joystick). I found this to be the most difficult to use effectively.

The last mode is Pan and Tilt (often called Follow mode by other manufacturers). In this mode, roll is locked (although you can still roll your phone with the joystick if you want), but both pan and tilt motions follow your movement in a smooth manner. This mode gives you the most creative control over the shot, so you can perform smooth sweeping dynamic shots.

Though not strictly necessary to use the stabilizer, you probably want to download the Yi Gimbal app. This pairs with the device and unlocks a couple of additional features, the most significant of which is SmartTrack mode. SmartTrack allows you to choose a subject, then have the gimbal attempt to keep that subject roughly in the center of the shot. You can use this when it’s mounted on a tripod, or handheld.

It works reasonably well for clearly defined objects, but on iOS I found the object selection to be buggy. I tried capturing my dog doing zoomies around the garden, and it just couldn’t keep up. Even with a slow moving subject like a person, if they turn around the tracking is often lost. It could be useful to follow the action of a moving subject like a skateboarder or car chase, but I’m not sure it’s reliable enough for that. Rather than risk it losing the object, it might be best to just use standard modes and rely on your own abilities.

The most frustrating thing about the app (at least on iOS) is that all the shots are saved to a separate library, and you need to individual save each one to the Camera Roll if you want to keep it. If you’ve taken a number of clips, this is frustratingly tedious to say the least. It would be tolerable if the app allowed you to use a Select All feature, but no, that’s only for deleting them.

Then there’s the disparity with native phone recording capabilities. The iPhone X can record 4K at 60FPS, while the app only offers a cropped 4K at 30FPS. On the Sony Xperia XZ2, which can record superb 4K HDR videos, there isn’t the option of 4K resolution at all. You could of course get around this by using the native smartphone Camera app to record all your clips, but then you lose on the fly access to gimbal settings and the ability to track objects. Since it’s almost always a good idea to record in the highest resolution and frame rate possible–even if your final project output is going to be of lower quality–I found myself using the native Camera outside of testing specific features.

Should You Buy the Yi Gimbal?

Yi has a habit of entering a market and undercutting all their competitors with a product that doesn’t compromise on quality. In this case, they’ve missed the mark a little on both accounts. The Yi Smartphone Gimbal is not particularly cheaper than other products on the market, yet offers less features and accessories. The buggy Yi Gimbal app isn’t helping, either.

It’s not a terrible device by any means: it works, and you can get beautifully smooth footage. But it’s difficult to recommend when there are just better products out there, for the same price or not much more. The Zhiyun Smooth 4, for instance, features a focus pull dial as well as a carry case and mini tripod. The DJI Osmo Mobile 2, similarly specced, at around $20 more.

If you find the Yi Smartphone Gimbal on sale for $80-90 and you’re on a particular tight budget, pick it up. At that price, it’s a great entry point. A gimbal stabilizer is something anyone who takes smartphone videos will benefit from immensely, regardless of what their skill level is. It’s a cheat code to cinematic smooth video.