Home Parenting Are you paying the Grandparent tax? 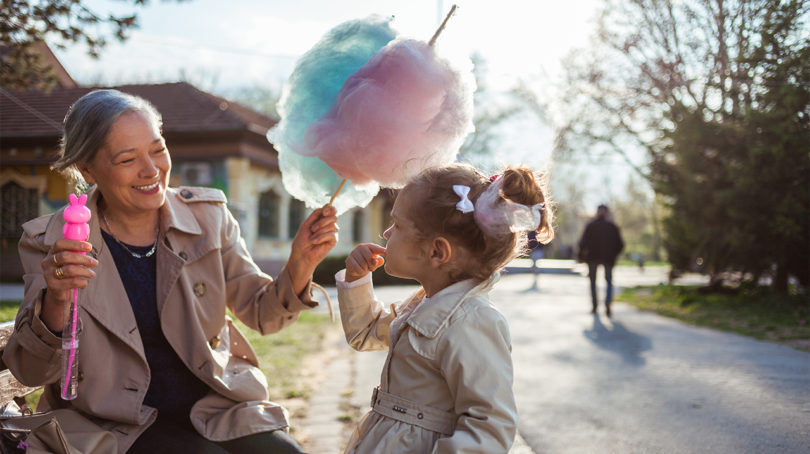 Are you paying the Grandparent tax?

Louise Soares* knew that childcare options were notoriously scarce in her part of the city. After failing to find a daycare solution that worked for both her toddler and kindergarten-aged kids, she turned to the grandparents. Soares’ parents and in-laws had been helping with the kids since her return to work, and while she had hoped to rely on them less once her eldest started school, it didn’t look like it was in the cards, so the Winnipeg mother of two worked out a new care schedule for the kids. But it came at a cost.

“A few months in, I noticed it was becoming more common for the kids to request fries and nuggets at mealtimes,” says Soares. “They’d ask if we could go to the McDonald’s family night every Wednesday and their rooms were littered with tiny plastic toys from the dollar store that they’d forget about as soon as the package was opened.” As for bedtime? Soares discovered that they didn’t have one if they were staying over at the grandparents.

Does this sound familiar?

Like Soares, you may be experiencing what I like to call the Grandparent Tax. While you might be saving thousands on childcare fees, there’s a hidden cost: the frustration of handling indulgent caregivers that refuse to toe the line when it comes to rules. And it’s a difficult subject to broach. Soares tries to take a big-picture perspective. “I know a few too many trips to McDonald’s isn’t going to ruin the kids in the long run,” she says. “They’re building connections with their grandparents and making memories.” Still, she admits this constant straying from the rules has resulted in a strained relationship with her in-laws over time.

Other parents may prefer to keep quiet, out of fear of rocking the boat. “Overall, my husband’s parents do a great job of looking after our daughter, and there’s peace of mind from knowing that she’s with people that love her,” says Jennifer Sze-Caffey*, a Toronto-area mom with a three-year-old and another one on the way. Because they’re doing her such a huge favour, she doesn’t say anything about how much screen time they’re giving her. But keeping your mouth shut can breed resentment over time.

How to reduce your tax burden

So, how do you cope? Rather than let things fester, air them out—but gracefully, and with tact, suggests Meghan Maynard, a registered psychotherapist and the director of Family Kinnections, a counselling practice based out of Welland, Ont. “Open, two-way communication leads to a successful arrangement,” she says. For a win-win scenario, parents can identify what is important to them in terms of rules and discipline, while grandparents can discuss their desires and limitations as well. This allows both parties to enter the arrangement with a shared understanding.”

Maynard suggests using the DEARMAN acronym from Dialectical behaviour therapy as a memory device when you need to get your point across in a clear but respectful manner.

(D)escribe the situation: Give your parents a quick rundown on the problem—they might have no idea.
(E)xpress how you feel: Explain your concerns and why it’s an issue.
(A)ssert your wishes: Tell them what you would have preferred they do and propose an alternative course of action for next time.
(R)einforce or reward the request: What’s in it for them? Tell them how your ask can be beneficial for them as well.
Be (M)indful: Focus on the current problem and avoid piling on with past complaints.
Be (A)ssertive: Make eye contact and be confident, without raising your voice or being aggressive.
(N)egotiate if needed: Be willing to hear your parents’ side of the story and look for middle ground.

This method can serve as a good jumping-off point for more discussion between you and your folks.

While the DEARMAN technique can help open a channel of communication, there’s an art to choosing what to bring up and what to let go of. Given the significant responsibility the grandparents are taking on when providing childcare, parents need to evaluate where they’re willing to be flexible and where they’re not going to budge. And don’t forget: when bringing up any points of contention, it wouldn’t hurt to mention how much you appreciate your parents’ help, and where you think they’re doing a good job. After all, no one likes feeling unappreciated.

In cases where relationships are fraught and keeping the peace is paramount, talking it out might be more trouble than it’s worth. If you’re finding that you and your parents are unable to see eye to eye or compromise on touchy topics, you may need to accept that this isn’t the right setup for your family. In fact, you might discover that it comes as a relief to the grands as well. They can still maintain a regular presence in your kids’ lives but on a more intermittent basis—several times a month, for example, rather than daily.

Ultimately, no arrangement is perfect. Can grandparents play an important and beneficial part of your children’s development? Of course! Do they serve ice cream for dinner more often than you’d like? Also, yes. Is the Grandparent Tax a small price to pay, or more than you can afford? That one’s your call.

*Some names have been changed.

The post Are you paying the Grandparent tax? appeared first on Today’s Parent.

Is Startpage Legit? Here’s Everything You Need to Know

11 memes that show exactly what moms...

We caved and hired a babysitter and...

This isn’t how I imagined my daughter’s...