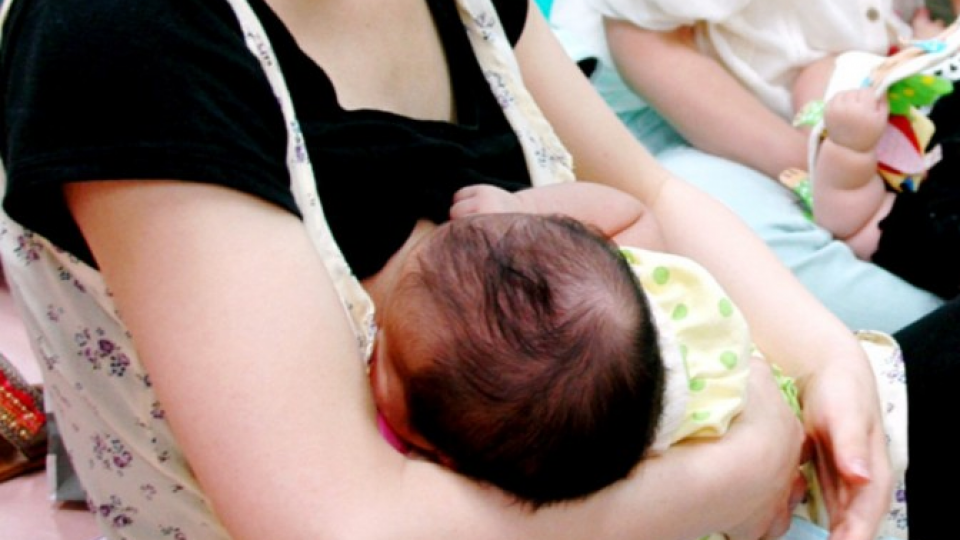 Recently, a mom friend and I were going toe-to-toe with funny sleep deprivation stories from our mat leaves. My firstborn, Eli, would feed between five and eight times a night, and I would often wake up confused and breastfeed him in a dream-like state. “I once picked him up,” I told her through laughter, “and he sounded so far away. It took me a few minutes to figure out I was holding him upside down.”

Another time, I nursed him while fully hallucinating. In my very vivid dream, I was breastfeeding a random baby that had been thrust upon me at an Italian orphanage. I wanted my own son back, but the orphanage manager told me I would have to keep feeding this little orphan baby before I could swap him for Eli. It took at least five minutes before I snapped out of it and realized I had, in fact, been nursing Eli the whole time.

As funny as it was recounting these hallucinations to my friend, there was a lot I didn’t share with her. Like the fact that this sort of thing had been going on for months, long after the typically sleepless newborn stage. I didn’t regale her with the less hilarious details of chronic sleep deprivation: the desperation; the headaches; the endless reading about sleep; the tears; the feelings of failure; and the fact that exhaustion was encroaching on every other aspect of my life, down to how often I showered.

So when a Facebook friend recently posted an anti-sleep training article about how unfair and unnatural it is to expect our babies to actually sleep, I had a visceral reaction. I could feel my face flush with anger and my jaw clench as I read how us “mamas” (with no mention of our “papa” counterparts) just need to accept how normal it is for babies to get up at all hours of the night because they need us. It was sleep-martyr articles like these that had kept me steeped in guilt whenever I considered sleep training my son. As a result, I sacrificed a lot, including sleep, on the altar of being a “good mom.”

There’s a lot of pressure put on mothers that comes from both within and outside the realm of anti-sleep training literature: Cherish every moment. Enjoy every middle-of-the-night nursing session. It won’t last. Everything is so precious. Essentially: Your baby needs you more than you need anything. Including sleep. These messages targeted at new mothers polarize “Loving your baby” and “maternal sleep” as if the two are mutually-exclusive options. But how can anyone feel pro-baby operating on zero sleep? How can I cherish every moment if I spend all day crying into the sleeve of my three-day-old pajamas?

And to this end, why are well-rested fathers spared judgment? My own husband was only well-rested because like many babies, Eli steadfastly refused a bottle. Co-sleeping didn’t work because Eli treated me like an open bar.

“Sleep when the baby sleeps” wasn’t a workable (or safe) piece of advice because Eli had to be held for every nap. Nor is it a solution for mothers who are back at their jobs before their babies are sleeping in longer chunks, for mothers caring for more than one child, or for mothers who want to be productive, social or active and need more than three to six hours of very fragmented nighttime sleep in order to do so.

When it’s just commonly accepted that a baby’s needs must trump a mother’s lucidity, we place unrealistic and unhealthy expectations on mothers to defy human biological needs all in the name of love. (You can get a mother to do just about anything for her baby “in the name of love,” by the way.) Why is maternal sleep, the most basic form of self-care, missing from the arguments about sleep training? Why do articles that romanticize nursing your baby 17 times a night sweep the most basic needs of a mother under the rug?

Maybe it’s taboo to say this, but it’s not all about the baby. That myopic view of motherhood ignores the cluttered landscape of practical and emotional demands that any woman is juggling at one time, like navigating the precarious terrain of a tantrum-prone toddler, nurturing her older children, being a supportive spouse, contributing to the household upkeep, dealing with extended family drama, or coping with life’s curveballs. It would be nice if women had the superhuman sleep stores of the Energizer Bunny, but we don’t.

I’m not saying we should all be lounging on 800-thread count sheets, wearing silk eye masks and logging a solid 12 hours while our offspring cry in another room. It’s not like we’re sipping wine in a bubble bath while the children run amok, hungry and with dirt-stained faces. But it’s a mother’s right—and responsibility—to ensure our tank isn’t so chronically low that we have to pull our resources from our family to focus on the health crisis (physical or mental) that inevitably results from too much self-neglect.

What if we put the words “self-care” and “sleep” next to “Dad”? The image changes. Unlike the image of a sleepy, grumpy, stressed-out mom, the picture of a tired dad is charming—even heroic, like he has gone above and beyond the call of duty, wearing his puffy face and cute, tousled hair as battle wounds from a long, sleepless night. We’ve all heard it: “He needs to sleep because he works!” “He needs to unwind because he worked hard!”—both maxims that don’t seem to apply to working moms, by the way.

In reality, I think most moms wish their babies could sleep half as deeply and as peacefully as most dads do: right through nighttime crying jags and 2 a.m. feedings. The “dad nap” is also an impressive skill—he can even snooze on the living room couch as the kids play noisily around him, TV blaring.

If babies were left in the sole custody of fathers around the world, I imagine that many things would be reframed: a man’s decision to “teach independent sleep” would be lauded as a noble act of love. (“Dad helped him through a few tears, and now Baby Charlie has the life-long skill of self-soothing!”) A dad’s need for sleep in order to go to work and provide for the family would be heralded as a professionally responsible decision in achieving a healthy work/life balance. Daylight Saving Time changes that result in kids waking at ungodly hours would be abolished by male politicians and lawmakers (because no father should have to wake up with the baby at 4 a.m.). And if dads were hallucinating from sleep deprivation? PUBLIC HEALTH EMERGENCY.

Ultimately, I knew I would never be able to hold down a job and get up with Eli eight times a night, and my return to work was a looming deadline. After we sleep-trained at 10 months, our world changed. For the remainder of my maternity leave, I was human again, and the tear-soaked pajamas got washed and rotated out. I finally felt like I could function.

Ironically, I had resisted sleep training for so many months out of love for my child, but after my second baby, Mavi, was born, I embraced it—also out of love for my children. I couldn’t be the devoted mother I aspire to be on zero sleep. My children’s safety is paramount, and sleep training has ensured that I can safely drive; that I am attentive to their stumbles, to loosened outlet covers and to choking hazards. Mavi’s now nine months, and I still feed her twice a night, but it means that I don’t cut corners and give her sleep props that increase her risk of SIDS. It means I don’t hallucinate while I am holding her.

For the mothers who are hanging on by a thread: You might hear that it’s unnatural and cruel to expect babies to sleep through the night, but I would argue that what’s unnatural and cruel is to make a mother feel that she must choose between love for her baby and her own health. Taking care of yourself and preserving some shuteye are vital—and not shameful—parenting choices. Ultimately, your child’s well-being depends on your own well-being.

Read more:
I had to stop obsessing over my baby’s sleep schedule for my own mental health
How to stop co-sleeping: An age-by-age guide

The post Choosing to sleep train your baby is a feminist issue (and a mother’s right) appeared first on Today’s Parent.

How I earned my post-grad as a parent

How to Change Your Netflix Region and Watch Region-Blocked Content

Is your new dog nipping, humping or playing...

I donated my eggs because I was...