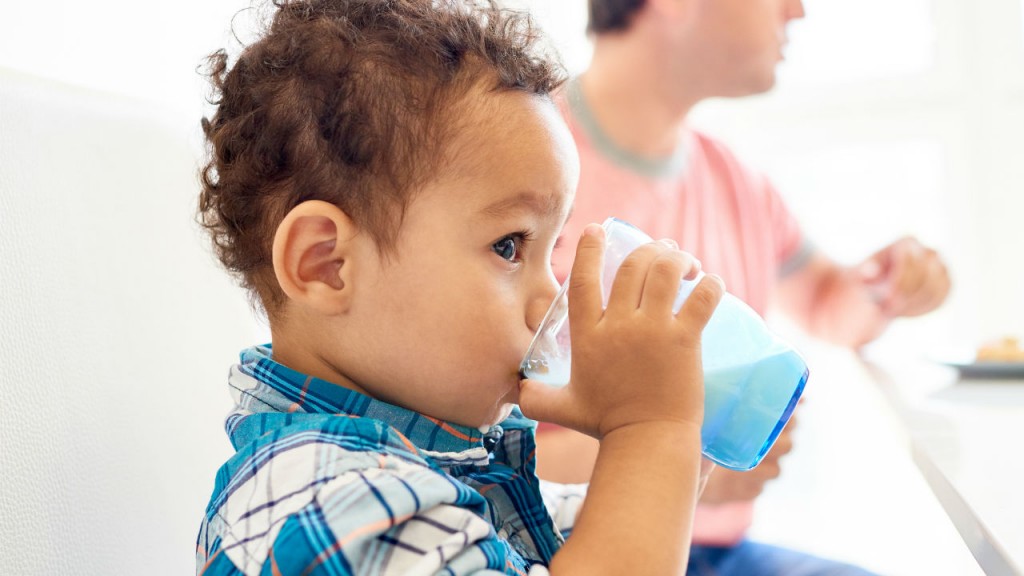 It’s lunchtime at Ledbury Park Childcare in Toronto, and today’s meal includes lasagna and a cold glass of milk.

“Our caterer sends rice beverage as the non-dairy alternative, because soy milk has been controversial, and almond milk isn’t allowed in our nut-free facility,” says daycare director Christine File. Kids whose parents haven’t made an alternative request due to a food allergy or dietary preference get 2% cow’s milk.

With only two varieties of milk in the fridge, File is lucky the situation is not more complex. As a dietitian, I review menus for daycare centres, and have seen a spike in recent months in the number of milk options being offered. It’s common for a childcare centre to have cow’s milk, plus oat, pea, coconut and rice beverages, adding an extra layer of complexity to lunchtime. Staff have to stay on top of expiry dates and inventory for each beverage, and must clearly know which child gets what. In the case of food allergies, mistakes can be life-threatening, so this is serious business.

What’s behind this sudden upswing in plant-based milk alternatives at daycares? Less than one percent of children have been diagnosed with a milk allergy, so that’s not the main reason. It’s more likely due to a general swing away from dairy for a variety of reasons, and a stronger emphasis on plant-based foods in general, due to things like animal welfare, veganism, sustainability, and concerns about hormones and antibiotics. Even the 2019 version of Canada’s Food Guide has a strong plant-based eating vibe, and puts less emphasis on drinking milk. This societal shift has trickled down to our youngest kids—but not necessarily for the better.

Are milk alternatives actually unhealthy for kids?By law, licensed daycare centres must plan menus that are consistent with advice from Canada’s Food Guide. (If the daycare is not licensed, there are no legal standards or safeguards). There’s been a spot for milk on the food guide since the first “food rules” in 1942, and milk has been a noted “food group” on every iteration of the guide for the last 75 years. But in the latest guide, for the first time in history, milk isn’t a stand-alone food group. Instead, dairy products are now part of the “protein” category, which also includes meat, fish, poultry, lentils, beans, nuts, tofu and eggs. With the absence of milk as its own food group, daycare directors are left wondering whether they even need to serve milk at all.

Laura Abbasi, a registered dietitian and a co-author of Ontario’s provincial daycare nutrition guide, says she has fielded calls from many daycare centres curious about swapping out cow’s milk for a plant-based alternative since the release of the new food guide. She advises against it.

That’s because the main point of serving milk is for the nutrients—and plant-based alternatives don’t measure up.

“Plant-based milk alternatives vary in their nutrient content and may increase the risk of nutritional deficiency, especially in infants and young children,” says Abassi. (Kids under 2, for example, get most of their protein from milk.) “Some milk alternatives may be low in calories, fat and/or protein, making them inappropriate milk substitutes for children, who require these nutrients for proper growth and development.”

The closest replacement for cow’s milk is soy milk, which has eight grams of protein per cup and is fortified with calcium and vitamin D. The drawback? Some parents are concerned that the natural plant estrogens in soybeans will disrupt their child’s own hormone levels. There’s no scientific evidence to link a moderate soy intake (1 to 2 servings per day) with harmful effects, but the wariness from parents prevents some daycares from offering it as the main beverage.

These shortcomings of plant-based milk alternatives have not stopped some daycares from unilaterally switching all children to plant-based milk–in many cases oat milk. They say technically they still “fit” the legal definition of following the food guide, since milk is no longer a mandatory food group. But it’s a grey area. One daycare supervisor that I spoke with didn’t want to be named in the article, because he wasn’t 100 percent sure if their plant-based milk met provincial guidelines—and didn’t want to get into trouble.

In some cases, daycares are making the switch to plant-based milk for reasons beyond nutrition, and take animal welfare and environmental sustainability into account. This reasoning doesn’t always sit well with all parents at the daycare. I spoke with several moms who wouldn’t be officially quoted because they didn’t want their daycare to find out they were complaining about the milk situation, but they said it was weird to make cow’s milk off the menu without consulting parents first.

Ultimately, no matter what a daycare offers, the parent gets to choose what their child will drink. In licensed childcare centres, parents are able to provide written instructions to the staff to guide that decision. If a parent wants their child to drink a milk alternative that’s not featured on the menu, they may be required to provide it at their own cost, but the daycare should accommodate the request to serve it.

Some parents might be wondering if milk is even needed—could your kid just drink water instead? Parents and guardians do have the right to make that choice for their children. File says there are children in her daycare who only drink water, and Abassi says that parents can request that their child not be offered any milk or milk alternatives (or any other type of food for that matter)—for personal, cultural, religious or medical reasons.

For now, the existing guidelines still encourage cow’s milk for most children, unless they have a medical reason to avoid it, such as a milk allergy. Of course, it is certainly possible to plan a well-balanced and nutrient-dense diet whether your child drinks milk, plant-based alternatives or water. If you do choose to remove all milk and alternative options, work with a dietitian to ensure you still meet your child’s needs for protein, fat, calcium and vitamin D.

However, I hear that fortified chickpea milk is poised to become the next big thing.

Read more:
24 secrets of daycare teachers—steal their tricks!
Daycare germs: what you need to know

WTF? Vagisil is targeting teen girls for having...

This mantra will help you weather the...

5 things to know about how your...

Is getting pregnant during the coronavirus outbreak...