Home Parenting White parents: Here’s how to (and how not to) talk to your kids about racism 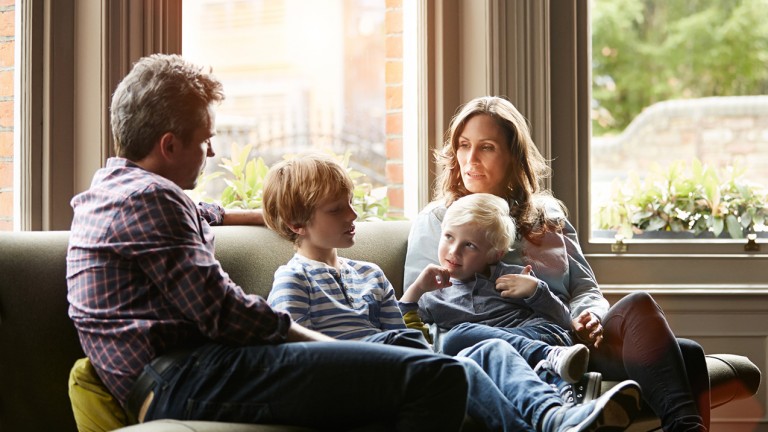 White parents: Here’s how to (and how not to) talk to your kids about racism

When I think about the horrific things that have happened (and are currently happening) in our world as a result of racism, it’s hard to find words. Or perhaps the problem is that the only ones that come to mind are of the four-letter variety and not appropriate for children. But we must find the words to talk about racism, prejudice and privilege in our families. We spoke with child development experts to get guiding principles to help start the conversation—and keep it going.


Visible minority groups have no choice but to have the conversation with their kids early and often, but when we asked parents on Facebook how they were talking to kids about racism, many said they weren’t. “I’m not surprised many parents aren’t having this conversation,” says Yamalis Diaz, a clinical assistant professor in the Department of Child and Adolescent Psychiatry at NYU Langone Health’s Child Study Center in New York. “Many parents avoid this conversation because it’s uncomfortable, they don’t know what to say, they’re afraid to say the wrong thing, and they want to ‘protect’ kids from negative information or images.”

Let’s acknowledge that it’s a privilege to live in circumstances where avoidance is even an option. But for many parents, ignoring the topic is more of a default than a concerted choice, because we feel unequal to the task. What if I botch it? What if my kids ask me questions I can’t answer? But we have to push through anyway, because our discomfort must be less important than caring for those who are targeted, and because silence perpetuates the systems that keep racism in place.

Start earlier than you think

Those who study children’s attitudes toward race say no one can afford to be silent, since kids start forming an understanding of differences a lot sooner than you’d think. “Children are attuned to racial markers quite young,” says Beverly-Jean Daniel, an assistant professor in the Faculty of Community Services at the School of Child and Youth Care at Ryerson University in Toronto, ON. “Kids as young as 2, 3 or 4 say they prefer light skin to dark skin, and many nursery rhymes and Disney movies are racialized. Because kids are exposed to negative messages early, it’s important to expose them to healthy ones as well.”

“If we look at it as an uncomfortable conversation, then you’re not gonna have it,” says Daniel. “I like to frame it as a safety and well-being issue, like talking to kids about strangers. Step away from that notion that you’re not saying it right. If you don’t get it right, try again. If you don’t know, say ‘I’m going to try to find out for you.’” Here’s another way to look at it; often good parenting feels hard (how not-fun is giving a consequence?), and this is no different. “It’s ok for it to feel uncomfortable. It is uncomfortable,” says Diaz. “Discomfort is likely the primary reason people don’t talk about it – but discomfort is a sign that the discussion was honest, meaningful, and real.”

Well-intentioned parent sometimes tell kids to be “colour blind,” teaching them not to acknowledge or even see skin colour, but there’s fallout to that line of reasoning. “The intention is to convey it shouldn’t matter because ‘everyone is the same’ but it actually communicates that it doesn’t matter, when we know that the reality is that it actually matters very much,” says Diaz. “This approach leads to a lack of recognition of the systemic discrimination and bias faced by people of colour when it is such a core issue. Don’t ignore it – recognize, understand, accept, embrace, and celebrate those differences.

Use books, TV and movies

Books that specifically tackle racism are worth seeking out, but Daniel says any book can be a springboard for conversation. “Help them to understand that all information is given from a particular perspective, based on who is writing and telling the story,” says Daniel. “Think about who gets to be normal and who gets the be a stereotype.” Ask your kid questions: How would you rewrite this story? Who’s included in this story, and who isn’t? Look for opportunities to point out stereotypes and provide a counter message. The same goes for TV and movies; all can provide an opportunity for a conversation.

Be there for your kids

It’s not easy to make sense of the current state of affairs, even for adults, but getting a dialogue going now sets the stage for a closer relationship later. “If you brush off their questions, you’re saying, ‘I’m not in a place where I can support your inquiries,” says Daniel. “As kids grow, they stop coming to their parent, and go to other places, so you need to let them know “There’s no conversation that you can’t have with me.”

This article was originally published online in August 2017.


The post White parents: Here’s how to (and how not to) talk to your kids about racism appeared first on Today’s Parent.

New understanding of RNA movements can be used to treat cancer

Things to Look for When Buying Delta-8 THC...

Canadian kids can no longer be subjected...

This ultrasound caught a baby peeing in...

September is Baby Safety Month: What You...