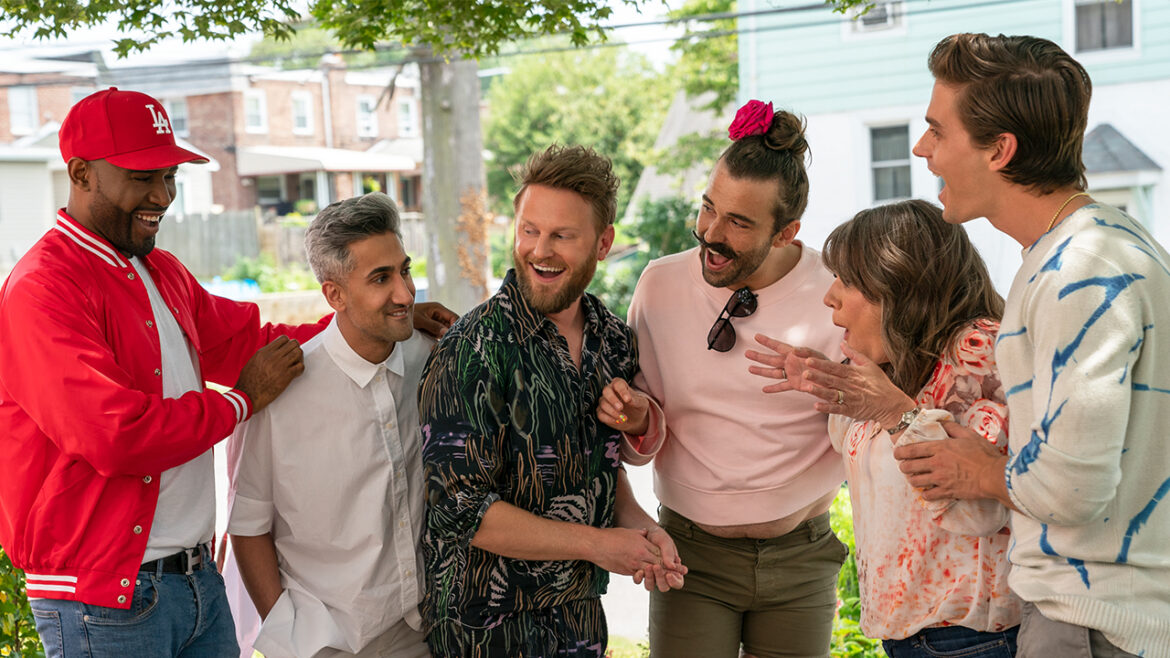 Binge-watch after bedtime: What’s coming to Netflix Canada in July 2020

As the new coronavirus’s spread impacts the world, the five members of Arashi explore what they can do to inspire Japan and their international fans. Available in July

Chico Bon Bon and his Fix-It Force crew are on call to solve any problem, from heating up a cold cup of cocoa to rescuing a sandwich from a safe. Available July 1

The iconic series Unsolved Mysteries is back! Fusing signature elements from the original series with contemporary immersive, character-driven storytelling, the new episodes are rooted in the experiences of ordinary people who have lived the unthinkable — from the trauma of a loved one’s unexplained disappearance or horrific death, to the shock of a bizarre paranormal encounter. Alongside detectives and journalists, family members offer clues, present theories, and identify suspects, hoping one viewer holds the key to solving the mystery. From the creators of the original docuseries, Cosgrove/Meurer Productions, and 21 Laps Entertainment, the producers of Stranger Things. Available July 1

Catch Me If You Can

Get Rich or Die Tryin’

Legends of the Fall

Never Back Down 2: The Beatdown

Under the Riccione Sun

While vacationing on the beaches of Riccione, a group of teens become friends and help each other manage romantic relationships and summer crushes. Available July 1

Once Upon a Time in the West

The Art of War

In a rollicking special, Thiago Ventura jokes about life in the hood, politics and more, explaining how actions speak louder than words. Available July 2

Netflix’s new series The Baby-Sitters Club is based on the best-selling book series, that follows the friendship and adventures of Kristy Thomas (Sophie Grace), Mary Anne Spier (Malia Baker), Claudia Kishi (Momona Tamada), Stacey McGill (Shay Rudolph), and Dawn Schafer (Xochitl Gomez) as the middle-schoolers start their babysitting business in the town of Stoneybrook, Connecticut. Rounding out the cast, Alicia Silverstone plays Elizabeth Thomas-Brewer, the selfless single-mother of Kristy Thomas and love interest of all around good guy Watson Brewer, played by Mark Feuerstein. Ann M. Martin, the beloved series author and producer on the new series, was the first to conceive the idea of these inspiring young girls with different backgrounds, personalities and opinions that were brought together by a business venture they conceived and bonded through the friendships they forged. The adaptation of the contemporary dramedy that continues to champion friendship, female empowerment and entrepreneurship was led by Rachel Shukert (Glow) as showrunner and Lucia Aniello (Broad City) as executive producer. Available July 3

When Lidia’s biggest rival uses a prison camp to enact revenge, Lidia and her friends become even more defiant in their fight against Franco’s regime. Available July 3

A paranormal researcher searches obsessively for a cursed home where something terrible happened to a mother and her child long ago. Available July 3

The BattlBox crew tests out a variety of products designed to help people survive dangerous situations, including fires, explosions and intruders. Available July 3

The Girl on the Train

A Kid from Coney Island

Astrologer Walter Mercado, with 120 million viewers at his peak, was sui generis: a peacock in macho culture, a naive biz whiz, a courier of hope. Available July 8

When four very different men appear in her life, a single mother who hasn’t dated in years begins to rediscover love—and herself. Available July 8

After catastrophic earthquakes devastate Japan, one family’s resolve is tested on a journey of survival through the sinking archipelago. Available July 9

Down to Earth with Zac Efron

In this travel show, actor Zac Efron journeys around the world with wellness expert Darin Olien in search of healthy, sustainable ways to live. Available July 10

The Epic Tales of Captain Underpants in Space

Best friends George and Harold—along with their classmates and tyrannical principal—are recruited for a mysterious mission in outer space. Available July 10

In this reality show, six singles meet five different blind dates at trendy hot spots in São Paulo. Who will they choose for a second date? Available July 10

Led by a warrior named Andy (Charlize Theron), a covert group of tight-knit mercenaries with a mysterious inability to die have fought to protect the mortal world for centuries. But when the team is recruited to take on an emergency mission and their extraordinary abilities are suddenly exposed, it’s up to Andy and Nile (Kiki Layne), the newest soldier to join their ranks, to help the group eliminate the threat of those who seek to replicate and monetize their power by any means necessary. Based on the acclaimed graphic novel by Greg Rucka and directed by Gina Prince-Bythewood (Love & Basketball, Beyond the Lights), The Old Guard is a gritty, grounded, action-packed story that shows living forever is harder than it looks. Available July 10

Twelve ordinary citizens on jury duty must decide the fate of a respected headmistress accused of two murders. Available July 10

The Business of Drugs

A panicked young woman (Nasim Pedrad) and her two best friends (Anna Camp & Sarah Burns) fly to Mexico to delete a ranting email she sent to her new boyfriend. On arrival, they run into her former beau (Lamorne Morris), who soon gets caught up in their frantic scheme. Available July 3

On est ensemble (We Are One)

Activists around the world fight injustice and drive social change in this documentary that follows their participation in the music video “Solidarité.” Available July 14

Urzila Carlson keeps the laughs coming with thoughts on The Biggest Loser, sex tapes and boxed wine in a stand-up special from Melbourne, Australia. Available July 14

Married Alma spends a fateful weekend away from home that ignites passion, ends in tragedy and leads her to question the truth about those close to her. Available July 15

From campy lies to sexy surprises, this collection of vignettes captures the follies of several men as they fumble with fidelity and relationships. Available July 15

Skin Decision: Before and After

Ellie (Nia Long) tries to mend her marriage with her husband Marcus (Stephen Bishop) after a brief encounter with an old friend, David (Omar Epps), only to find that David is more dangerous and unstable than she’d realized. Fatal Affair is directed by Peter Sullivan. Available July 16

Matchmaker Sima Taparia guides clients in the U.S. and India in the arranged marriage process, offering an inside look at the custom in a modern era. Available July 16

Three best friends in their 40s start relationships with younger men while on vacation. Available July 16

In a Brazilian cattle-ranching town, adolescents panic when they’re threatened by the outbreak of a contagious infection transmitted by kissing. Available July 17

Based on the New York Times bestselling book, Cursed is a re-imagination of the Arthurian legend, told through the eyes of Nimue, a young woman with a mysterious gift who is destined to become the powerful (and tragic) Lady of the Lake. After her mother’s death, she finds an unexpected partner in Arthur, a humble mercenary, in a quest to find Merlin and deliver an ancient sword. Over the course of her journey, Nimue will become a symbol of courage and rebellion against the terrifying Red Paladins, and their complicit King Uther. Cursed is a coming-of-age story whose themes are familiar to our own time: the obliteration of the natural world, religious terror, senseless war, and finding the courage to lead in the face of the impossible. Available July 17

On the heels of the Fall Ball, Ashley continues her California adventure—and explores the thrills and spills of teen romance. Available July 20

As Moritz and the MyDrugs crew ramp up their hustle, the online drug shop grows more successful—and even more dangerous. Available July 21

From the creators of Chef’s Table, the hit series Street Food returns for a new culinary adventure. The newest installment will travel to six countries in Latin America and explore the vibrant street food culture of Oaxaca, Mexico; Salvador, Brazil; Buenos Aires, Argentina; Lima, Peru; Bogota, Colombia; and La Paz, Bolivia. Each episode highlights the stories of perseverance and culture that bring life to each country’s cuisine. Available July 21

This docuseries chronicles how the feds took down the five mafia empires of New York City at the height of their powers during the 1980s. Available July 22

Love on the Spectrum

Finding love can be hard for anyone. For young adults on the autism spectrum, exploring the unpredictable world of dating can be even more complicated. Available July 22

This season of the Norwegian Viking comedy goes back in time to tell the story that led to Season 1. Don’t worry, there is still plenty of pillaging and plundering. Available July 22

After waking up in a morgue, an orphaned teen discovers she now possesses superpowers as the chosen Halo-Bearer for a secret sect of demon-hunting nuns. Available July 2

The island adventures of silly larva buddies Yellow and Red get a feature-length treatment, taking their slapstick fun to the next level. Available July 23

In this new singing contest, players face off on some of the biggest hits, and the jackpot of up to 30,000 euros grows every time they hit the right note. Available July 24

When a musical dragon with a beautiful voice hypnotizes the dragons and people of Huttsgalor, the Rescue Riders have to find a way to break the spell. Available July 24

In this sequel, high school senior Elle juggles a long-distance relationship, college apps and a new friendship that could change everything. Available July 24

Vizier and the Immortals rule over modern Istanbul, Hakan travels to the past to stop a war, and Zeynep undergoes a powerful transformation. Available July 9

Netflix’s critically acclaimed, Emmy-nominated series Last Chance U returns for Season 5 in a brand new setting to give viewers a raw, authentic look at the junior college football program at Laney College in the heart of Oakland, CA. After clinching the title of state and national champions in 2018, the Laney Eagles have a hard season to follow and a lot to prove. Going into his eighth season and having built the program from the ground up, powerhouse head coach John Beam must fight to rally the team amidst countless setbacks. Season 5 brings intensity both on and off the field as players battle injuries, stress, and personal demons while finding much needed support in the community and taking pride in their scrappy mentality and motto “Laney Built.” Available July 28

Inside the World’s Toughest Prisons, Season 4

On their dying planet, the Autobots and Decepticons battle fiercely for control of the AllSpark in the Transformers universe’s origin story. Available July 30

Four teen enemies band together to exact revenge on their bullies until they get blamed for a crime they didn’t commit. Will they get mad—or get even? Available July 31

Latte and the Magic Waterstone

In this animated adventure, brave hedgehog Latte sets out to retrieve a magic stone from a greedy bear king and restore water flow to the forest. Available July 31

Two besties with polar opposite views of men, sex and love navigate the complicated singles scene together in this romantic comedy. Available July 31

Four teams of brilliant bakers battle it out for sugary success as they race against each other and the clock over three rounds of competition. This season the challenges are harder, the creations are more spectacular and the rewards are even sweeter. Hosted by Hunter March, judges Candace Nelson & Adriano Zumbo return for the Extra Sweet season. Available July 31

After years of stealing jewelry, Zulema and Macarena recruit four other women for a final heist worth millions, to take place at a narco family wedding. Available July 31

Leaving July 28:
Ant-Man and the Wasp

5 sweet ways for dad to bond with baby

This hilarious tired mom went on a cleaning...

What to do when your kid’s best friend...

How you offer a bottle can be more...

With my career on hold and my people...

I sent my kids away because of...

How my family is coping with anxiety...

What’s the difference between cleaning, sanitizing and...