Home Parenting “Sorry, she thinks she’s a cat”— why some kids are obsessed with role play 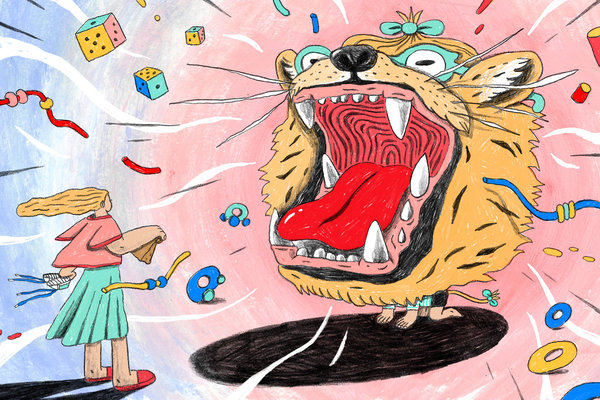 “Sorry, she thinks she’s a cat”— why some kids are obsessed with role play

The mere act of leaving the house sparked her transition into full character—tiny hands were held up like paws, all words were replaced with meows (including to other adults and kids at the park), and startlingly loud “Rawr!” noises signalled her displeasure or desire for attention (or both).

This went on for what felt like forever. Sometimes she would even stay in character at home, meowing for milk, which she never cared to drink in “kid” mode, and rubbing up against our legs instead of hugging. It was cute, but as the phase dragged on, it became frustrating and befuddling. Was our preschooler conducting the world’s most intense campaign to get a cat (we had only a dog then, which she insisted was not “a real pet”) or was something else going on?

It turns out that this type of intense pretend play, which often begins to appear around age two and may include imitating animals, fictional characters and even adults (doctors, chefs or construction workers), is a sign that kids are beginning to understand others’ perspectives. The term for this phase of social development is called “theory of mind,” says Elizabeth Young, a developmental paediatrician and assistant professor at the University of Toronto. “Kids retain what they have seen caregivers, other kids or TV characters do, then they start to pretend they are that person,” she says. “It’s really the start of being able to understand how other people might be feeling or thinking.”

Kids also use imaginative scenarios to process issues they’re wrestling with but can’t express verbally, says Vanessa Lapointe, a registered psychologist in Surrey, BC. This can stretch through age seven or even longer for what Lapointe calls “sensitive or intense” children. “This is how kids make sense of their world when they don’t have access to a lot of high-level emotion language. They play it out.”

When Lapointe’s own son was three, he was hospitalized after an asthma attack in which he stopped breathing. Once he returned home, he spent a lot of time playing doctor. “He was just on this path to feel in charge of something that had felt very beyond his control at the time,” Lapointe says.

Some kids don’t intuitively understand when pretend play is appropriate and may need some guidance, says Michael Dickinson, a paediatrician in Miramichi, NB. He suggests parents try to stay calm (fake it if you have to!) and redirect kids to an appropriate activity in a positive manner rather than using discipline.

Getting upset “can have the unintended effect of reinforcing the behaviour and making it worse,” says Dickinson.

There is no need to worry unless the behaviour starts to negatively impact your child’s ability to do normal daily activities—eating, sleeping, dressing or going outside. If this occurs, he suggests asking for advice and support from your family doctor or paediatrician.

Lapointe recommends intervening if you sense your child is “stuck” in a pretend play scenario that is troubling them. For example, if they are replaying an accident or trauma and fixating on harm, a helpful resolution would be to suggest that a “helper” arrives on scene. If that doesn’t work, Lapointe says to be patient while your kiddo discovers the boundaries of their imaginary world. “Try not to get tripped up or freaked out by your kid’s play and just lean into it and see where it goes,” she says.

Lapointe suggests that my daughter morphing into a kitty during our park outings was perhaps her way of coping with her desire to be social with others conflicting with feelings of vulnerability.

“When you step into your play frame, you become safer. Maybe you feel like you want to talk to people, but you’re a bit shy. Meowing at them as your cat self allows you to get a little bit closer to hanging out with another kid,” she explains.

Sometimes our little kitty attracted a following of meowing playmates. But sometimes it didn’t, and watching her meow repeatedly at kids who didn’t want to engage was cringe-inducing. We started pre-empting our park trips with chats about how we needed to leave the kitty at home and use our words instead of cat sounds so other kids could understand us.

“The truth is, the way kids learn not to be a cat in certain situations is to get negative feed-back like, ‘What are you doing?’ from their peers,” Young says. Now eight years old, my daughter will still occasionally morph into a kitty, only she’s more selective of when she does it (usually with friends and only if they’ve all agreed to be cat superheroes.)

We hope you enjoyed reading this article from Today’s Parent. We’re working hard to provide our readers with daily digital articles that aim to inform, inspire and entertain you.

But content is not free. It’s built on the hard work and dedication of writers, editors and production staff.  Can we ask for your support? We are currently offering 3 issues of the print edition of Today’s Parent for only $5. A subscription also makes a great gift for that new parent in your life.

Our magazine has endured for more than 35 years by investing in important parenting stories. If you can, please make a contribution to our continued future and subscribe here.

The post “Sorry, she thinks she’s a cat”— why some kids are obsessed with role play appeared first on Today’s Parent.

What makes ships mysteriously slow down or stop, even though engines are running?

Do we know what we want in a romantic partner? No more than a random stranger would

How to fix your kid’s garbage COVID...

6 things to consider when buying a...

How to create the perfect sleep environment...