Why RAM Boosters and Task Killers Are Bad for Android 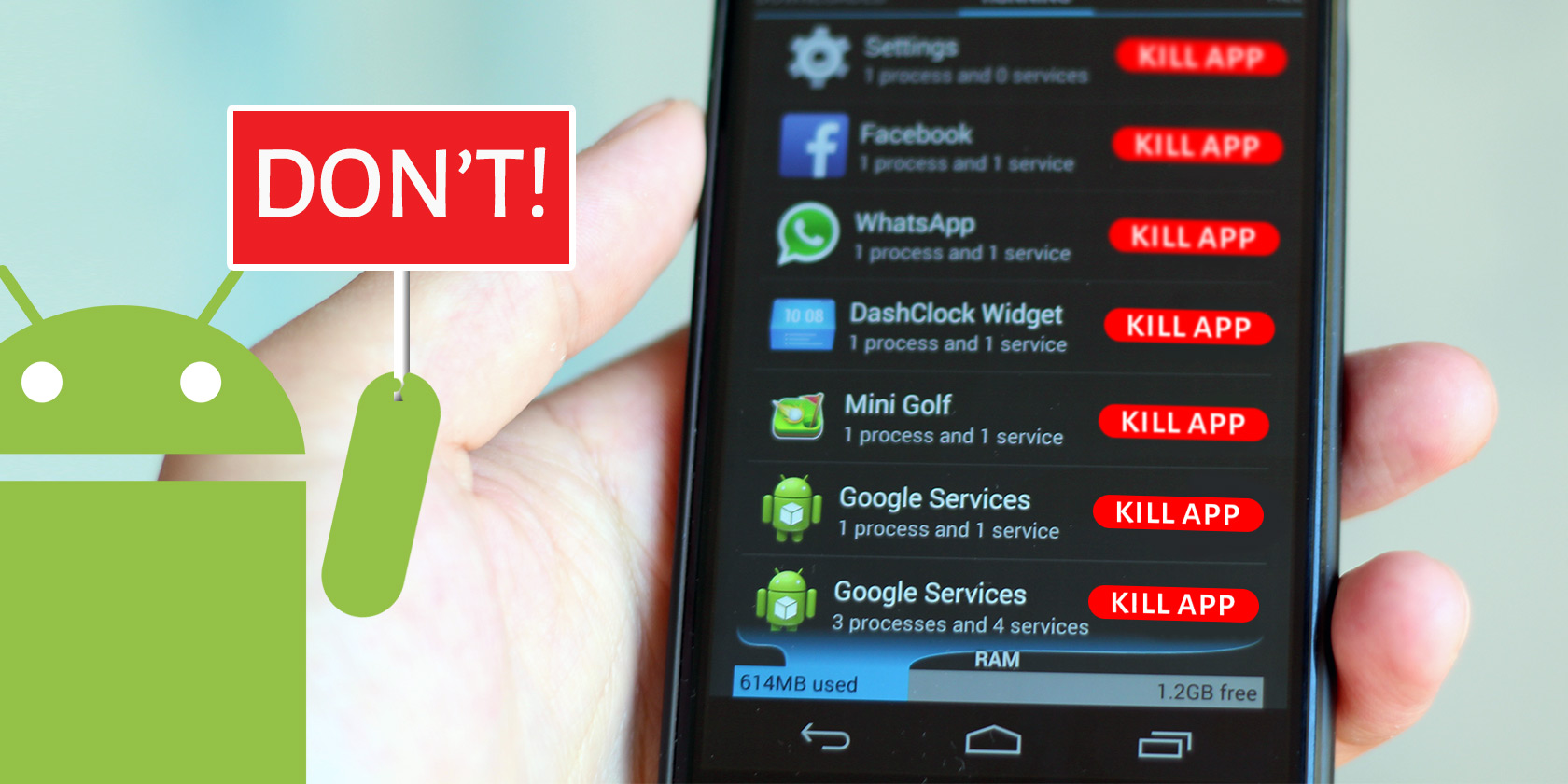 If you use Android, you may have heard advice about using a RAM booster or task killer app. Scroll through the Google Play Store and you’ll see a ton of task killers on offer with high reviews.

This may lead you to ask if RAM boosters really work. As it turns out, your phone doesn’t need these kind of apps and using them can even harm your performance. Let’s see why.

A Primer on RAM

Before looking at how task killers work, we must understand what RAM is and its purpose for your phone. RAM stands for Random Access Memory and is a fast yet volatile type of storage used by computers and phones.

Operating systems—whether Windows, Android, or something else—use RAM to store currently running programs. This means when you open an app on your phone, Android loads it into RAM. It keeps the app there for a while so you can easily switch back to it and pick up where you left off without reloading the app fully.

RAM is volatile, meaning that when you shut down your phone, everything stored in it disappears. This contrasts with the permanent storage on your phone, which obviously persists between reboots. Loading something from RAM is much faster than pulling it from main storage, though.

See our quick guide to RAM if you’re interested in more information.

Now, because your device only has so much RAM, you might think that manually managing processes is essential. This is easy to assume if you’re a Windows user.

On Windows, the OS keeps unused RAM free for programs that may need it in the future. If you have so many processes running that they fill up your RAM, Windows has to switch to the page file. This is a chunk of your storage drive that acts as pretend RAM when the system needs more.

Even an SSD is still much slower than RAM, so you’ll feel the slowdown when Windows uses the page file. At that time, it’s a good idea to close some running programs and free up RAM. But this isn’t the case on Android. While it’s not a perfect adage, Android follows the “free RAM is wasted RAM” principle from Linux. The Linux kernel puts “unused” RAM to use for caching, which makes your system performance feel smoother.

Practically, in Android, this means that apps you opened some time ago will stick around in RAM until newer apps need that RAM. Android discards the older apps to make room for higher-priority processes based on your usage.

An Example of Android’s RAM Usage

To take an example, let’s suppose (for simplicity’s sake) that your device has 4GB of RAM and each app takes up 500MB. That means your phone can hold eight apps in RAM before it runs out of room (we’re excluding RAM used by system processes here).

Now, say you open four apps and check each of them for a minute, then put your phone down for 30 minutes. When you pick it back up, if you open any of those four apps, they’ll resume right where you left them, since your phone kept them in RAM.

If you then open up five more apps, the fifth will exceed the amount of RAM on your device. Android will thus analyze which app in RAM is least important based on which ones you’ve used most recently and which apps have priority. For example, if you’re playing music on Spotify, Android will keep that background process alive even if you haven’t opened it in a while.

From there, Android discards the least important app from RAM so it can hold the one you just opened. If you switch back to the app that was discarded, it will have to load from a cold state again.

Why Task Killers Are Terrible

Now that you understand how Android uses RAM, let’s consider how task killers affect this operation.

Most task killers and RAM boosters follow a similar format: they show you what apps are currently running (and thus using RAM), then offer to free up some RAM by having you tap a button to kill those processes. After closing, it shows you that those apps aren’t “wasting resources” in the background anymore.

The problem is that after you kill those apps, they have to start up again from scratch next time you open them. Plus, some processes will start up again right after they’re killed, as they need to run in the background for various reasons.

Thus, killing apps constantly is a waste of resources compared to just letting the app stay in RAM so you can quickly swap back to it when needed. As discussed, Android is smart enough to juggle what’s in RAM based on your usage, and the RAM you “free up” by killing tasks doesn’t contribute to performance.

Continuing the above example, say you’ve opened four apps recently, so Android has them all in RAM. If you run a RAM booster at this point, it will likely kill all those apps to “free up memory.”

This is pointless—if you’re going to use those apps in a few minutes, freeing up the memory they used doesn’t do you any good. Android keeps recent apps in RAM to make your experience as seamless as possible, and task killers interfere with that.

Additionally, some task killers can run automatically in the background and kill apps on a schedule. This uses up some of your system resources and offers nothing in return.

Swiping Apps Away Isn’t Necessary, Either

Even if you don’t use a task killer, there’s a built-in feature of Android that acts similarly to a RAM booster if you go overkill with it. The Recents screen, which you access by swiping up from the bottom and holding (or hitting the square button on the navigation bar) lets you easily switch between recent apps.

If you swipe up on an app, you’ll clear it from the Recents menu and also close its process. Many people do this obsessively, swiping away all apps in the switcher every time they’re done using their phone.

This is not necessary! Closing apps that you were just using has the same effect as ending them with a task killer. You’re making your phone work harder because it has to start them anew next time you open them. This would be like if you completely closed your desktop browser and launched it again every time you wanted to navigate to a new page.

Think of the Recent menu as a handy shortcut switcher, not a list of open apps that you need to close. Only swipe an app away if you don’t want cluttering up the switcher or really don’t want it to run in the background.

Chances are that you installed an Android task killer because your phone feels slow. Thankfully, there are several steps you can take to improve your Android device’s performance that don’t involve killing tasks.

We’ve looked at tons of ways to actually make your Android phone faster; check those out for actionable advice.

We’ve seen that Android RAM boosters and task killers are useless at best and can hamper device performance at worst. In the end, it’s best to just let the Android OS do its job by managing memory on its own. Having free RAM doesn’t improve performance; you’ll get the best results when apps stored in memory open quickly.

Now that you aren’t killing apps all the time, check out the best ways to multitask on Android.

Read the full article: Why RAM Boosters and Task Killers Are Bad for Android

How to Change the Default Startup Sound on...

How to Join a Minecraft Server