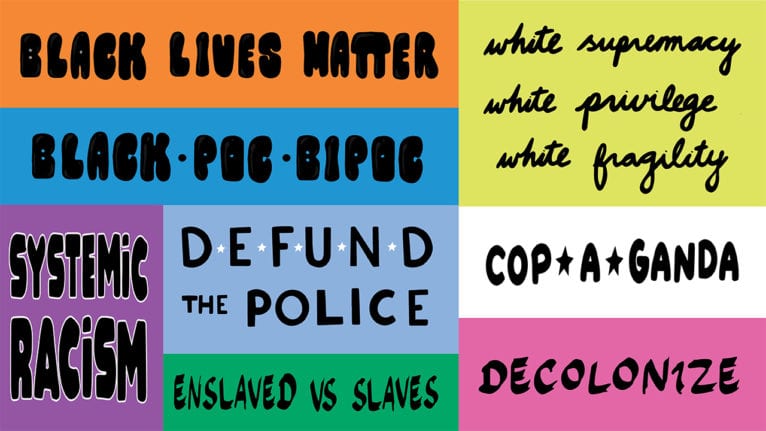 After the 2013 acquittal of George Zimmerman, the man who killed African-American teen Trayvon Martin, the #BlackLivesMatter call to action was started by Alicia Garza, Patrisse Cullors and Opal Tometi. The hashtag has been used across social media to call attention to matters of anti-Black racism, and the movement has created a decentralized network of global chapters dedicated to Black liberation.

A portmanteau of “cop” and “propaganda,” copaganda refers to the practice of pushing or publicizing pro-police stories or photos to mask the negative ones. An example: videos of police playing water guns with white kids, when a Black boy was shot and killed for holding a toy gun.

In a social justice sense, decolonizing starts with questioning everything you’ve been taught about privilege and power dynamics in Western society. Why do we learn the history that we do? Who is hailed as the hero, and who is left out of the story? What is considered “the norm” in society, and why? Decolonizing means doing the work to deconstruct the ideas that have been passed down to us through colonization.

Many activists have proposed a measure to defund the police, which means to divert some of the funds that go toward policing (Canadians spend $41 million dollars per day) to other community-based organizations and initiatives to help keep us safe, like more funding for education, housing and mental health services—aspects of community that research has shown will help curb crime if supported more fully.

Using the word “enslaved” to describe the people taken from Africa during the Transatlantic slave trade is a way to pay respect to their identities. Slavery is something that happened to them—being a slave is not something they chose to do.

While the terms “supremacy” and “white supremacist” might conjure images of white-power extremists and the Ku Klux Klan, white supremacy is really just the idea that whiteness and white people are dominant in society and that the political, economic and cultural systems we live in reinforce that idea.

A term that makes many uncomfortable, “white privilege” simply means that white people have never had their lives negatively impacted, particularly on a systemic level, because they are white. Coupled with white supremacy, this also means that whiteness is a benefit in our society.

Coined by scholar Robin DiAngelo, white fragility is when some white people, even those who identify as progressive or anti-racist, react immediately with defensive indignation when confronted with their own racist behaviour, rather than accept that we all have inherent racism.

Racism is not just the instance of using a racial slur. Systemic racism means that racism shows up in the way our very institutions are designed—from the education system to employment to healthcare to criminal justice, where people of colour, particularly Black and Indigenous, suffer the most.

The post These are the anti-racism terms you and your kids need to know appeared first on Today’s Parent.

As a parent of colour, I’m committed to recognizing my own internalized racial biases

How to create the ultimate home gym—for your...

What if e-learning didn’t work for your...

Breastfeeding Diaries: “It wasn’t as hard as...

What is GOTS-Certified and Why You Should...