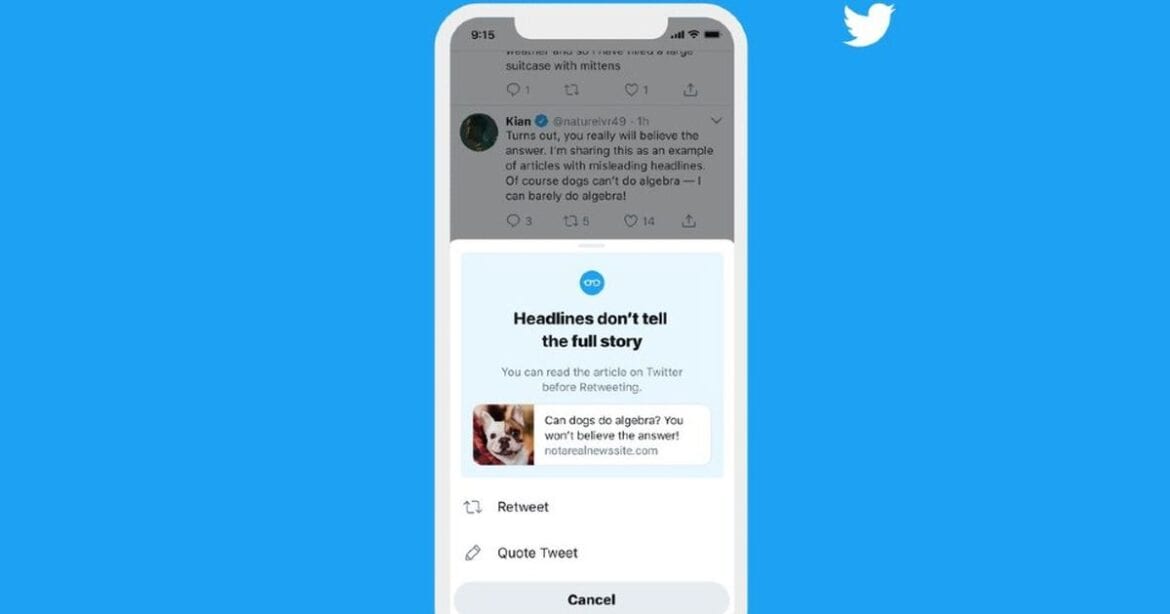 Twitter Will Prompt You to Read Articles Before Retweeting Them

Twitter is rolling out a new notification that encourages you to read an article before Retweeting it. The platform hopes that the prompt will help encourage more informed Tweeting.

Since June 2020, Twitter has been experimenting with a feature that pushes users to read articles before Retweeting them. If Twitter detects that you haven’t opened the article on Twitter, you’ll get a notification that prompts you to read it.

The feature was initially tested on Android devices only, but it’s now coming to all phones around the world. Twitter shared the results of the test in a Tweet.

What’s next:
🔜 Making the prompt smaller after you’ve seen it once, because we get that you get it
🔜Working on bringing these prompts to everyone globally soon 👀 pic.twitter.com/08WygQi06G

Twitter also said that it’ll make the notification smaller after you’ve seen it once. This will make the prompt less annoying to users who actually know what they’re Tweeting about.

In its initial Tweet about the new feature, Twitter said that its goal is “to help promote informed discussion.” Twitter doesn’t want its users to send out Tweets based solely on the headlines of news articles. Rather, it wants users to find out the whole context of the article before jumping to conclusions.

This isn’t the only step Twitter has taken to crack down on misinformation—not only has it created an election information hub, but it also now adds context to trending topics.

Giving users a warning before Retweeting unread articles will probably help curb some uninformed Tweeting, but it definitely won’t stop it altogether. People will still send out factually incorrect Tweets regardless, which is why it’s sometimes best to leave certain users on mute.

A better alternative to phthalates?

Why Has Disney+ Removed Some Films From Kids’...

Is This the Beginning of the End for...

Apple May Be Working on New Health Gadgets

6 Reasons Why You Should Be Using pfsense...

How to Emulate a Raspberry Pi on...

How to Transfer Your PS4 Game Data...