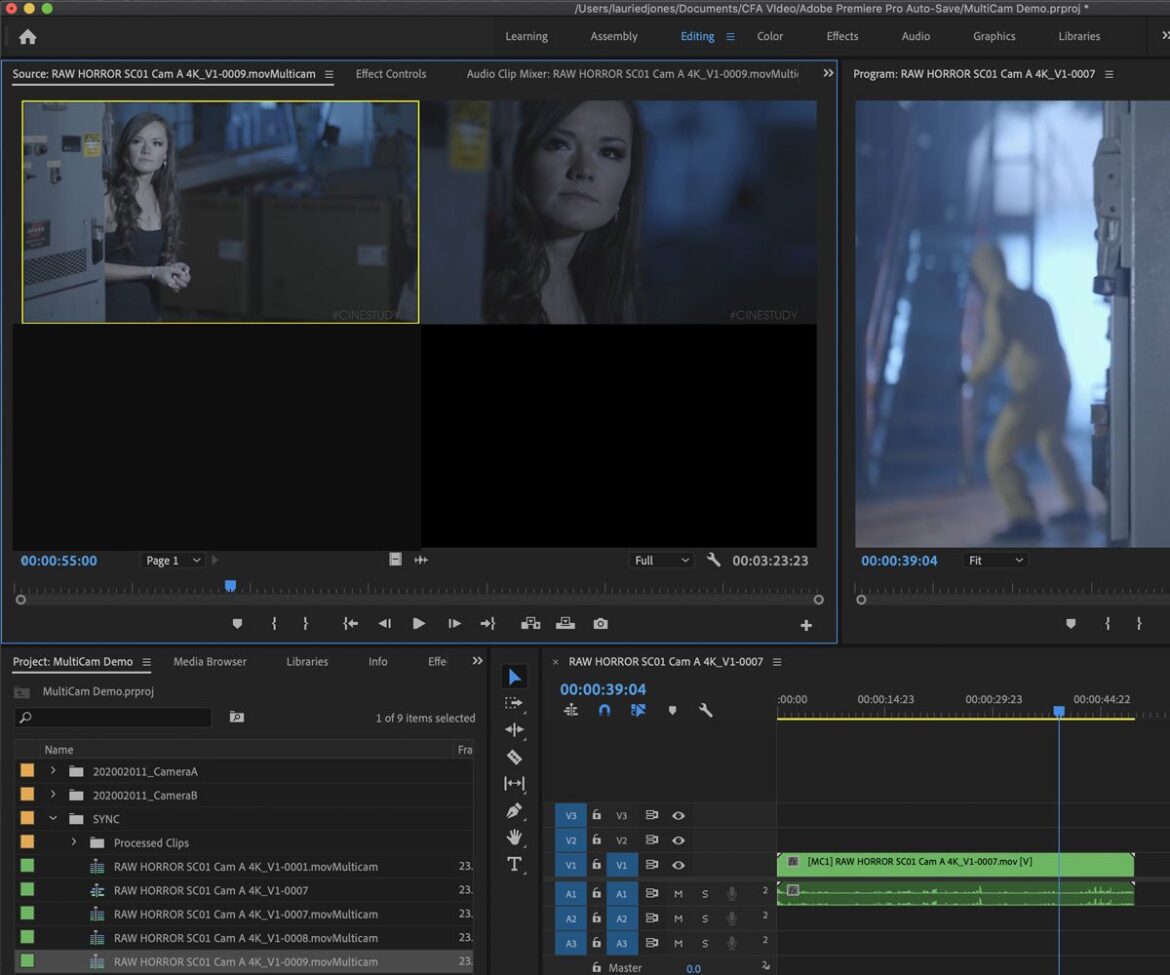 How to Create Multi-Camera Sequences in Adobe Premiere Pro

Organization is the bedrock of a smooth editing process. With a single camera shoot, sorting and cataloging your footage is a fairly straightforward process.

If you’re making a video with multiple cameras, however, not only will you now have to log and prepare more footage, but you will also need to have that footage synced, sorted, and ready to roll.

Thankfully, Premiere has a range of functions to make sure that multi-camera shoots are as painless as possible. This article will examine some of the ways to streamline your multi-camera project.

Bringing Your Footage In

The worst thing you can do with multi-camera edits is to mix up footage from multiple cameras in your project. To avoid this, ensure that your rushes are in clearly labeled bins.

Failing to do this will have you scrambling for a golden shot later on, as you’ll be unable to discern what came from where.

A common professional tactic at shoot level is to have a camera labeled as the primary “A” camera, with subsequent cameras being “B,” “C,” etc.

If you’re not fortunate enough to be working with that level of organization in the footage you’ve received or shot, then make sure you differentiate your camera footage as best as you can to prevent confusion later on.

Don’t let sloppiness from a shoot drag your edit down! Keeping your projects organized in Premiere Pro is often a vital part of the editing process.

If you have footage from multiple cameras covering the same events, you have the option to “sync” clips within a multi-camera sequence.

In layman’s terms, this is a sequence containing more than one piece of footage, all accessible as a single reference “file” in your project window. You can load them into the source monitor as you would regular sequences and footage, but with the bonus of being able to switch between camera angles during playback to get the best clip.

To create a multi-camera sequence, a selection of sample footage kindly donated from Cinestudy will be used. During this process, we’ll take multiple camera feeds, sync them, and then edit them. The rushes packages from Camera A and Camera B for Scene One will be used as working examples.

Note: As the rushes are only available as one video file, they have been individually cut into video files for syncing for the purpose of demonstration.

You can only create multi-camera sequences out of clips that sit in the same bin, which can be a bit of a headache for those trying to keep their projects organized and tidy as described above.

One of the easiest ways to maintain your project structure is to create a “syncing bin” solely for syncing clips inside. Copy and paste your clips in, leaving your existing organization intact.

Once you have all the clips you want to create multi-camera sequences out of, select them all, right-click, and select Create Multi-Camera Source Sequence.

A new window should pop up. In this window, you can set the parameters for how the multi-camera sequences will be made, what they’ll be named, as well as what to do with the individual footage that’s been synced.

To create a multi-camera sequence, you need to sync two or more video clips. One of the most crucial choices is Synchronize Point. You have an option of syncing via In and Out Points, Timecode, and Audio.

Syncing by In and Out Points allows you to use your manually-set points on your source monitor as the points to line up your footage. Most commonly, this is used when syncing via the use of a clapperboard, at the point by which the top of the board hits the bottom.

If you’re lucky enough to be working with a professional shoot team that has synced their footage in advance via timecode, you can use the Timecode option. This will allow you to sync up using the data that has been inputted into the camera and sound recording devices.

Finally, the Audio option allows you to sync up your footage via audio. If all of your footage is carrying sound recorded during your shoot, Premiere Pro can analyze the waveforms and sync them up if there’s a match—it’s pretty cool!

After you’ve chosen your synchronization point, you can also decide how the multi-camera sequences will be named, adjust the video settings (if you don’t want them to mirror your footage), and decide whether the source clips will be moved to a new folder or remain with the new sequences.

Once that’s all decided, click OK. After some time, Premiere will deliver a selection of multi-camera sequences for you to use!

A multi-camera sequence is treated much like any other sequence or piece of footage. Here are some examples of how they look in the project bin window.

While in the source monitor, you should see your synced clips playing in a split-screen window. You can select the clip in the split-screen that you want to use by clicking on it, and then inserting it into the timeline, whether by keyboard or by dragging and dropping it in.

If you have the Insert and Overwrite Sequences as Nest or Individual Clips toggle enabled in the timeline, any multi-camera sequences will revert to the individual clips, playing over each other in sync like so.

However, if you have this disabled, your clip will be presented as a single clip, like you would see with a nested sequence.

Best of all, if you want to change to a different camera angle without affecting your edit, you can simply load your multi-camera sequence back into your source monitor and change your view.

If you’re logging your clips (which you should be doing), you can also create sub-clips from your multi-camera sequences that will retain the ability to switch between cameras.

This is exceedingly useful for a multi-camera editing workflow. As a result, it’s highly advised that you create any multi-camera sequences before you start logging to avoid doubling up.

Pandemic got you down? A little nature could help

5 Musical Skills You Can Learn Online...