Apple cider vinegar is a century-old home remedy that has gained popularity in recent years due to its numerous health benefits.

From your favorite food blogger to your mother-in-law, it seems like everyone is talking about apple cider vinegar (or ACV) lately! It’s popping up everywhere in recipes in addition to supplements. Dating all the way back to Hippocrates, apple cider vinegar’s health benefits have been relied upon and boasted about for years.

Keep reading to learn about the many health benefits of apple cider vinegar.

What Is Apple Cider Vinegar?

Let’s start with the basics. Apple cider vinegar is fermented apple juice. All that means is yeast is added to naturally present on the apple ferments apple juice, which turns the sugar in the juice into alcohol.

Now don’t worry, we’re not talking about the kind of alcohol you’re thinking of! That alcohol is quickly turned into acetic acid by the benign bacteria that are is also present in the juice.

This bacteria and yeast combination is referred to as the “mother”.

Acetic acid is the active ingredient in apple cider vinegar. AKA, acetic acid is responsible for most of the health benefits you can receive as a result of consuming ACV. But we’ll get to more on that later!

In the United States, the FDA even requires a certain amount of acetic acid to be present in order for a product to be labeled as vinegar, 4 grams per 100 mL of liquid as a minimum to be exact (1) When you’re looking to purchase apple cider vinegar to receive all of the benefits, you want to look for an organic, raw, unfiltered, unpasteurized option, which is why we recommend Bragg Apple Cider Vinegar.

Let’s break down these definitions from Bragg Apple Cider Vinegar:

In recent years, as the health benefits of ACV became better known, this vinegar has been converted into supplement form as well, and you can find apple cider vinegar in capsules as well.

Just like with the liquid form, you want to take the quality into consideration and ensure that there are clinical studies showing the efficacy of the supplement. Bragg Apple Cider Vinegar Capsules are the only ACV supplement on the market with 750 mg acetic acid per serving, which is the specific amount needed to reap the benefits of ACV. 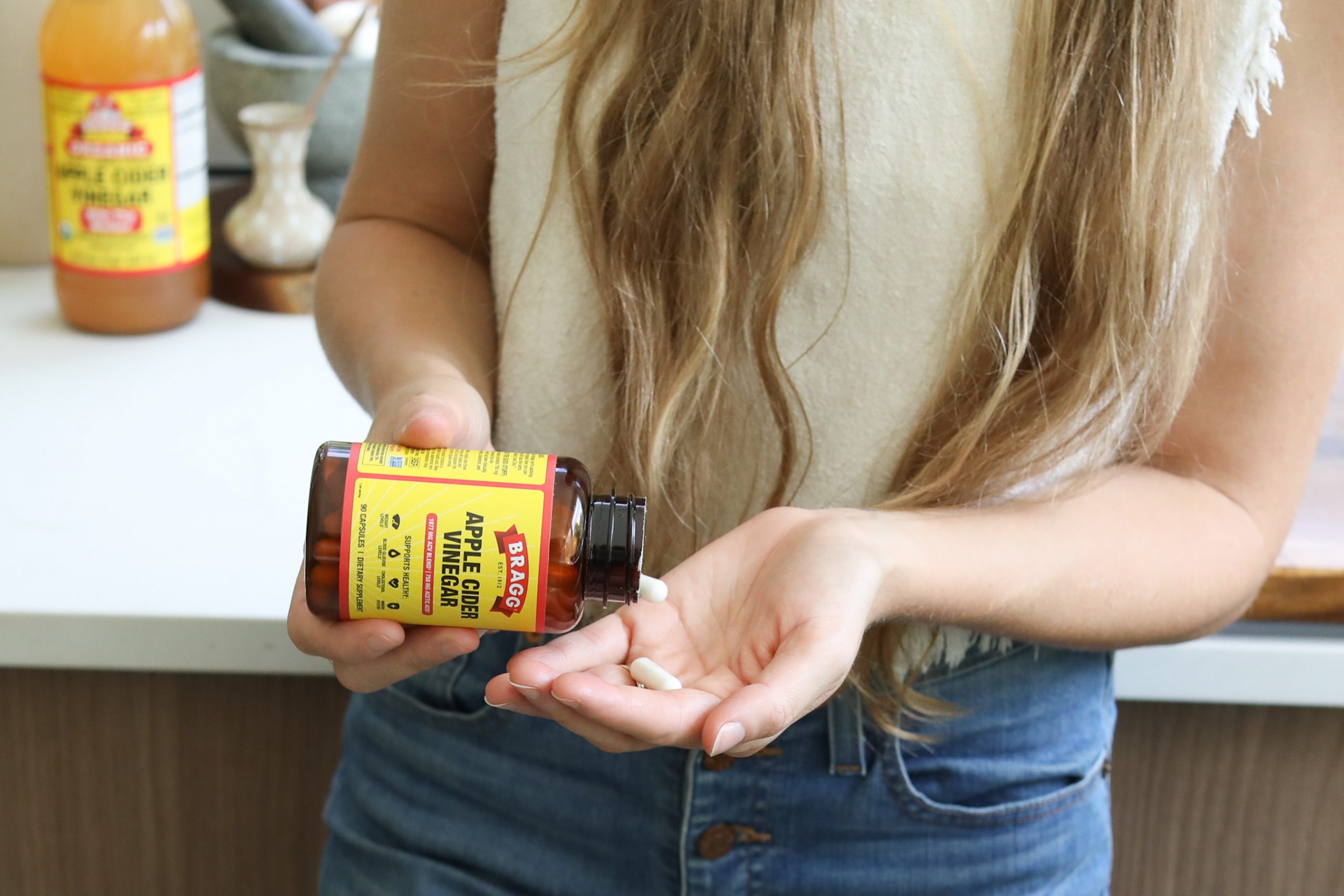 Now that we know how apple cider vinegar is made, what it is and the different forms it comes in, why do we want to consume it?

Let’s chat about the health benefits of ACV.

One of the most heavily supported health benefits of apple cider vinegar is its ability to help regulate blood sugar.

For example, research has shown that consuming ACV before bed results in lower blood glucose levels in the morning (2). This was even shown in adults with well-controlled type 2 diabetes.

Study participants were tasked with drinking ACV before bed every night for 30 days. The results showed that they were able to healthily reduce weight to help them find their balanced weight (4).

Similarly, another study showed that when apple cider vinegar was consumed daily for three months, participants saw a healthy reduction in weight as well as waist circumference (5).

Are you looking to regulate your cholesterol and triglyceride levels? Apple cider vinegar may help!

Another health benefit of apple cider vinegar is its ability to reduce cholesterol levels over time. When consumed regularly and consistently, studies have shown that a significant decrease in these lab values is the result (6), (7). Who Should Take Apple Cider Vinegar?

First and foremost, if you’re someone with any of the above-mentioned health concerns, it can’t hurt to add apple cider vinegar into your routine!

If you have type 2 diabetes, high blood sugar, high cholesterol levels, or are working to find your balanced weight, apple cider vinegar may be a great addition to your diet.

If you’re looking to conveniently add apple cider vinegar into your diet to reap said health benefits, a supplement is a great way to do so. Braggs is currently the leader in the supplement field boasting 750 mg acetic acid (remember, this is where all the good stuff comes from!) per serving size of their capsule supplement.

Looking to simply boost your health without any health concerns present? You can easily add apple cider vinegar into your usual routines and recipes. It can be mixed into a dressing, or consumed as a beverage when diluted with water.

Although apple cider vinegar is safe, as with any new supplementation, check in with your primary care physician as well as your registered dietitian.

This is a sponsored post brought to you by Bragg, a brand we love, trust, and are excited to recommend to you. All our opinions are our own.

How to Stock Your Pantry for Balanced Eating

How to Have More Ease With Food In...

How to Start a Meditation Practice

NS Society Monthly: What Is Plant-based?

Can Food Improve Your Mental Health?

Guide To Working From Home Healthfully