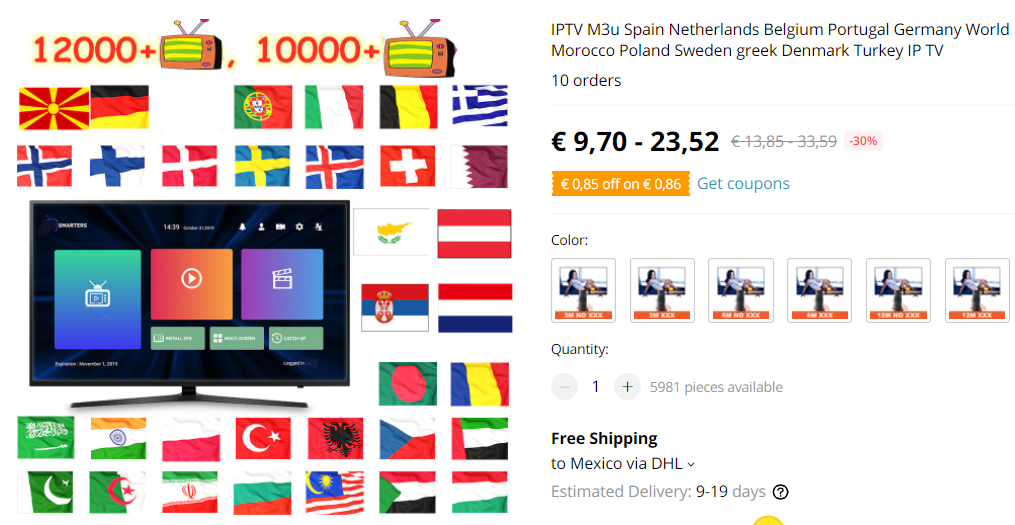 5 Reasons Why Using Illegal IPTV Streams Is a Bad Idea

The high cost of live TV—both through cable and IPTV apps like Sling and Hulu—has driven an increasing number of people towards illegal streaming apps, add-ons, and services.

We can see the appeal. If you know where to look, you can find everything from live sport to the latest Hollywood blockbusters on-demand.

But what are the dangers of using these illegal services? Unfortunately, the risks are numerous. Let’s take a closer look.

Several sites and apps exist which allow you to access illegal content for free. However, there’s also a large market for paid illegal services.

Perhaps most notable is the IPTV sector. A quick search on Reddit reveals dozens of illegal IPTV providers. Each of these provides access to thousands of live TV channels from all over the globe.

Typically, prices for such services are between about $5 and $15 per month, with extra costs for those who want to watch on multiple devices at the same time. And, just like many legal services, several providers offer impressive discounts if you sign up for a multi-month package.

Signing up for long periods puts you at risk of financial loss. Because of their illegality, the providers are not regulated, meaning they could stop offering their product and vanish on a whim. Again, Reddit provides countless examples of this happening.

Obviously, there’s also a significant risk that authorities could pursue a provider through the courts, which again means the service potentially ceasing without warning, thus leaving you out of pocket.

We suspect most of our readers—intentionally or otherwise—have probably stumbled onto a site offering illegal free live TV at some point in their lives.

If you have been on such a site, you’ll know that developers load the sites with very aggressive ads. Remember, these aren’t ads from Google Ads or another similarly reputable ad network. Many of the ads are providing links to some form of malware.

Worse still, the ads are deliberately highly deceiving. Downloadable items are disguised as Play buttons and close window icons, windows move around the page, and ads are layered on top of each other. And if you turn on an ad blocker the sites will not let you access the content.

Often, you need to close several ads before you can get close to watching a video. One wrong click, and you could inadvertently let malware access your device.

The problem isn’t only limited to websites. Countless services have followed in PopcornTime’s footsteps, offering on-the-fly streaming of P2P content. Many such services have apps for platforms like Android TV and Fire TV. Because they’re not on official stores, the apps aren’t going through any rigorous security checks.

Use them at your own risk.

Poor reliability is a huge issue across the illegal streaming industry.

Illegal paid IPTV services frequently suffer from buffering, while many of the provider’s advertised channels often do not work. Remember: this is a service you’re paying money for. If the quality isn’t there, what’s the point?

Aside from the financial aspect, there are practical issues. If you want to watch a big sports game, you can never be sure that it’s going to work. If the service goes down at the last minute (as frequently happens due to an influx of would-be viewers), you could find yourself missing the action.

The problem is even worse on sites that offer illegal TV streams. Rights holders aggressively pursue such domains, meaning streams can vanish mid-program.

While it’s true that it is often the uploaders—i.e., the source providers—who TV networks pursue most aggressively, there have been cases in both the US and Europe of end-users being dragged into the courts.

It’s a common misconception that watching illegal streams of movies or live TV is permissible from a legal perspective.

The argument claims that you’re not downloading any data, and thus are not making a copy. In practice, streaming video stores temporary data in a cache on your device, providing a route for authorities to launch a prosecution. Small odds? Perhaps. But definitely possible.

In Europe, the situation is more clear-cut. An April 2017 decision by the EU Court of Justice ruled that streaming copyrighted content without the correct permissions was breaking the law.

Still not convinced? Here’s what Kieron Sharp, chief executive of the Federation Against Copyright Theft (FACT), said to The Independent newspaper in June 2017:

We’re looking at the people who are providing the apps and add-ons, the developers. And then we’ll also be looking at […] the end user. The reason for end users to come into this is that they are committing criminal offenses.

And even if you can make a tenuous argument that the transitory period of data during stream does not constitute “making a copy,” remember that if you’re using Kodi add-ons such as Exodus, you’re working with software that’s been defined as illegal under the “Inducement Rule.”

The Inducement Rule is a law created by the US Supreme Court in 2005 which says a company or website can be held accountable for distributing unlicensed content if it encourages a user to infringe a copyright.”

If caught using such add-ons, it’s unlikely that you’d be able to defend yourself under the “safe harbor” guidance in the Digital Millennium Copyright Act. You should stick with legitimate live TV streaming services instead.

A letter sent out by a US ISP warns customers that by engaging in persistent online piracy they will force the company to downgrade their access plan to the minimum, and customers may have problems with controlling thermostats in the dead of winter. […] https://t.co/6EegMO7f8J pic.twitter.com/Sq0cbI7057

Using illegal streaming services could result in your ISP disabling your internet connection.

The issue is most commonly seen in regard to downloading illegal torrents, though it can also happen with unlawful streaming services.

The first you hear of it is when you receive an email or a letter from your ISP, explaining the infringement. You’re not going to get booted off after the first warning, but repeat infractions could lead to a disabled connection or speed throttling.

Of course, one way to make sure your ISP doesn’t know what you’re streaming online is to use a high-quality paid VPN service. Here at MUO, we recommend using either CyberGhost or ExpressVPN.

Use Legal IPTV Instead

Instead of taking on the risks we’ve outlined, why not use a legal TV streaming service instead?

There are lots of apps, services, and add-ons that provide legitimate free access to live sports, TV shows, and movies. They won’t get you in trouble and are infinitely more reliable.

How to Use the Blending Mode in Photoshop

How to Silence Spotify Ads Without Harming Artists

Were You Affected By the DoorDash Data Breach?

The 7 Most Reliable Sites for Free...

6 Ways to Unblock Websites From Behind...