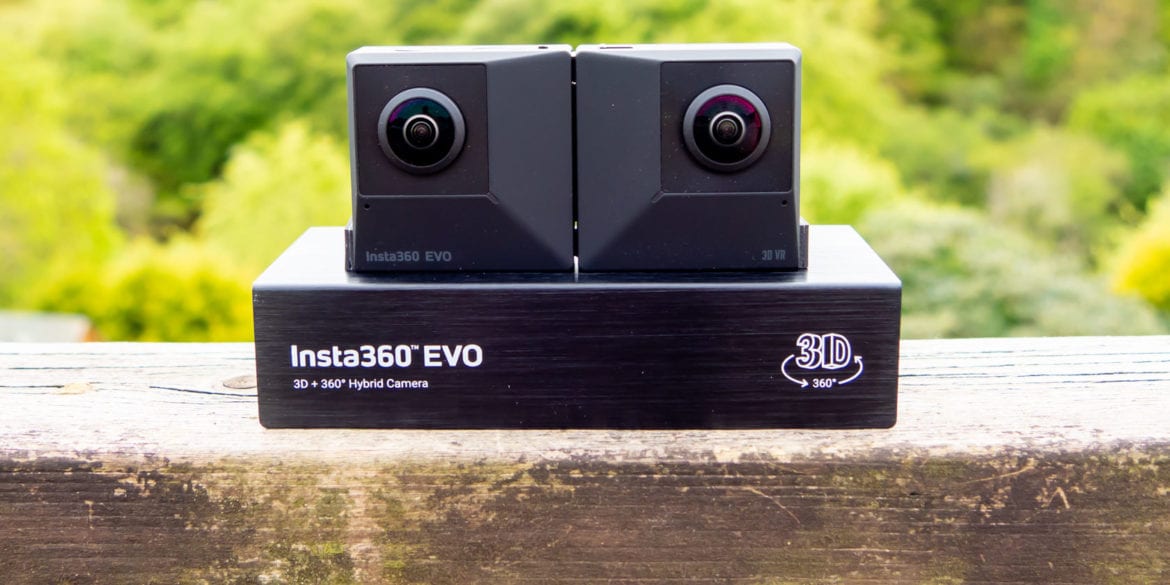 Insta360 Evo: Now Anyone Can Make Movies for VR 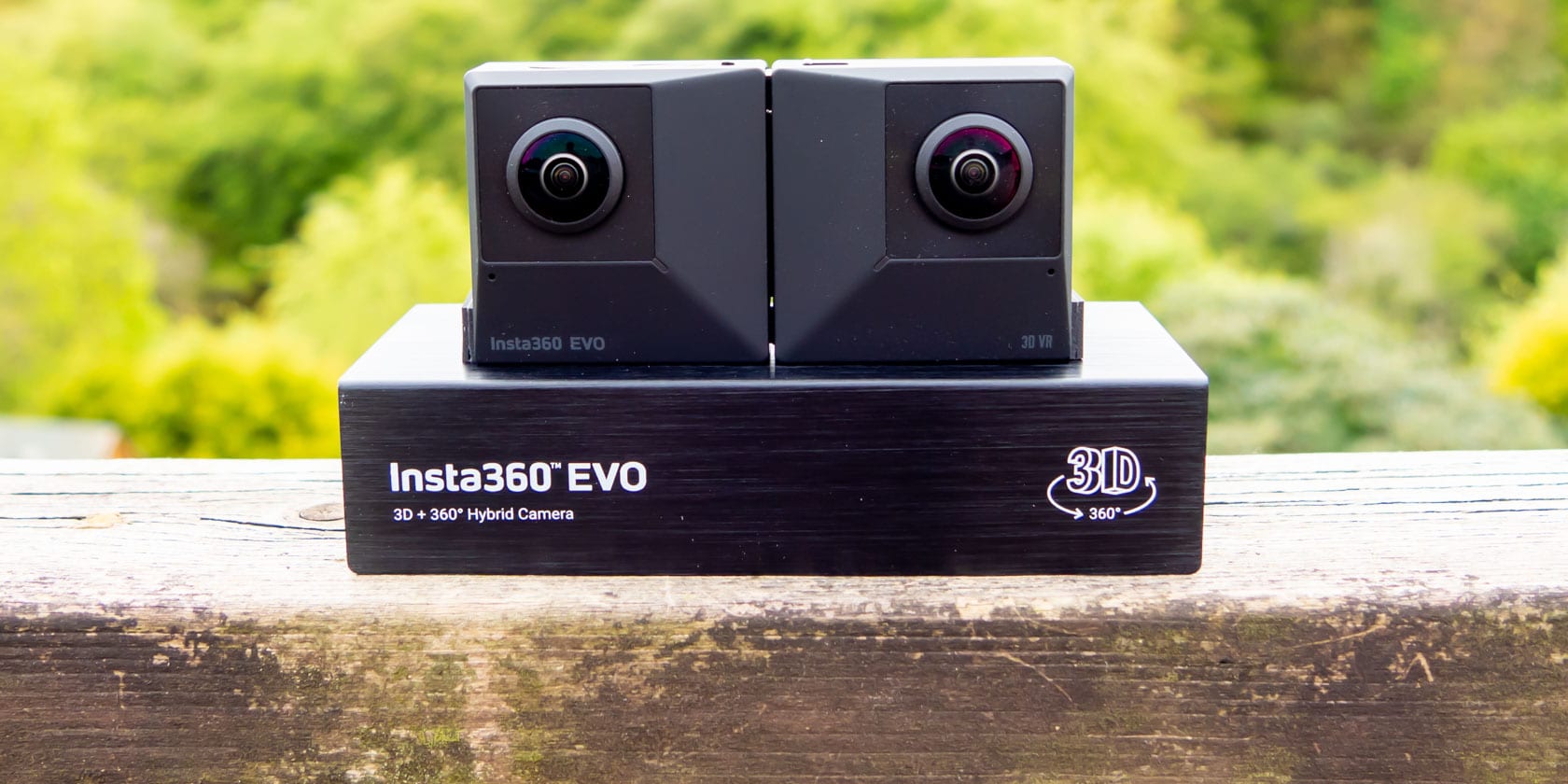 Our verdict of the Insta360 EVO :
Great quality footage for immersive viewing makes this convertible 360/180 stereoscopic device the best way to start making VR movies right now. It’s only let down by a non-removable battery and weak plastic clips to lock the position. 910

If you have a VR headset, you’ll know how immersive 180-degree 3D videos can be. But the hardware to produce such videos has been either too pricey or only capable of grainy, low-resolution video. Insta360 EVO changes that. Now you can make beautiful 5.7K resolution 3D, VR180 videos … for less than $500. I’m confident in saying it’s the best consumer-grade camera around for VR moviemaking.

If that wasn’t enough, the convertible design means it can transform back to a 360-degree camera. This gives it the same “shoot now, point later” magical freedom of the Insta360 OneX.

Check out our video review below–preferably on a VR headset if you have one–to find out exactly what we thought of the Insta360 EVO. Nearly all of the review was shot directly on the EVO, so there’s no better way of sampling the footage. And as always, at the end of this review, we’re giving one of these amazing devices away to one lucky reader. Enter using the competition widget at the bottom of the review.

Insta360 EVO: Specifications and What’s In The Box? I’m not usually one to comment on packaging, but the unboxing experience of the EVO was exquisite. The camera is secured in the box mounted to a large metal stand with a tripod screw from underneath. I’m not sure if this is supposed to serve a later function given the inclusion of a mini tripod, but it’s quite dramatic if you want to keep your device out on display.

Also in our review set was the Holoframe, an accessory for your phone that enables you to view 3D content without the need for a VR headset or special glasses. More on that later. When folded, the EVO is a neat little two-inch cube, weighing no more than four ounces. It’s minuscule and extremely easy to carry around. Swapping between the two modes and locking them back involves some flimsy plastic clips. These seem like they’ll be the first things to break. The buttons to unlock those plastic clips are small and fiddly too. I found myself not actually knowing if it was locked, or halfway in. Just keep it unfolded if you’re unlikely to use the 360-mode.

Controls and indicators on the EVO device itself are sparse: there are two buttons and two LEDs on top, and two LEDs on the front. One button is a dual purpose power and shutter button; the other switches mode between photo and video. The current mode is indicated by one of two LEDs. All of the LEDs flash alternately when recording. There is no menu system or LED panel: any setting beyond photo/video and record/power are done through the app. The battery is a little larger and therefore lasts longer than the OneX, but on the flip-side it’s non-removable. Still, when shooting for VR, it’s easy to plug the camera into an external power source, since the rear view is invisible (unlike 360-degree videos, where you can’t hide anything).

360-Degree Features Too? Why Would Anyone Buy the OneX Then?

Despite being a convertible design, don’t think this model is a replacement for the OneX device. They do share many of the same features: the core ability to shoot now and point later, automatic removal of the magic selfie stick, TimeShift and FlowState Stabilization, as well as some of the more obscure modes like Tiny Planet. You’ll find all that when shooting in 360-mode on the EVO. I’ve glossed all of this, despite being incredible, because they can all be seen in our Insta360 OneX review.

But two features are noticeably absent. You can’t LiveStream to social platforms, nor can you record Bullet Time sequences. If those were things that really stood out to your from the One X, stick with that. In addition, the lenses are physically further from each other, so the stitching along the horizon may contain more errors. This is a relatively minor gripe, but my point is that if 360-degree shots are your primary intent, buy the OneX instead.

FlowState Stabilization for VR Too

One feature that really differentiates the EVO from competitors is the FlowState Stabilization technology, which gives you ultra-smooth footage by using the onboard gyroscope. This works in both the standard 360-degree mode, as well as 180-degree stereoscopic.

That said: it’s important to remember that most new VR users (and even some experienced ones) will find artificial motion in VR makes them nauseous. It’s a bit like motion sickness, only in reverse. Your eyes perceive movement, but your body isn’t feeling it. For a while, the advice when filming for an intended VR audience was to remain static and simply observe the scene, but this has relaxed a little as most users develop their “VR legs” quickly. Still: know your audience before deciding whether to use camera movement.

If you do intend to move the camera, do it slowly. The FlowState Stabilization certainly helps to smooth things out compared to not having it all.

Preview the Shot in VR

When previewing something intended for VR on a flat screen, it’s practically impossible to get an idea of scale or presence.

But if you have a Vive Focus, Oculus Go or Oculus Quest, you can preview the footage live through the Insta360 VR app. This is yet another standout feature that sets apart the Insta360 EVO. You can view both the videos already taken and stored on the microSD card, as well as a live viewfinder. You can stream directly from the camera, while you’re shooting. This takes away the guesswork of framing correctly or ensuring objects aren’t too close. There is, of course, a small delay when streaming over Wi-Fi, and you can’t watch at the full resolution. While it is an incredible feature to have, I didn’t find myself using it to preview shots that much. It was useful for checking out what I’d already recorded, though, and the whole process is about as seamless as it could be. Put on your headset, connect to the camera’s Wi-Fi, open the app. Done.

If there’s one serious drawback to the EVO, it’s the amount of effort required to edit the video. This isn’t a unique problem to the EVO, but it is compounded by such high resolutions!

While the mobile app is perfectly functional for short clips, it’s limited to producing 4K content. For the full quality 5.7K resolution, you’ll need to process the files from the Insta360 Studio desktop app. It took about half a day just to output all the footage I took for the review video, with my MacBook Pro fans running full speed. You’ll also need an enormous hard drive: it works out at about 1 GB per minute.

That’s just to output the raw footage: you’ll need a professional editing suite like Adobe Premiere or Apple Final Cut Pro X to take advantage of 360-degree editing. (Pro-tip: For Final Cut, make sure you select horizontal 360-degree stereoscopic top/bottom as your output format. It’s the last option on the list, and not the default). After you’re done editing, it will, of course, take longer than usual to render your final video, given such a high resolution.

But you’re not finished yet: for uploading to YouTube and displaying it as a VR180 video, you’ll need to use Google’s free VR180 Creator tool to inject the required metadata. Otherwise, YouTube doesn’t know it’s designed for VR, and will just try to compress it to a regular viewing window.

In short, it took an inordinate amount of time to process, edit, render, inject metadata, then upload the 15 GB review video you see embedded!

You’ll need a powerful machine, a big hard disk, an unlimited internet connection, and a mountain of patience. I should note that there is apparently a more direct integration with Adobe Premiere, but I don’t have that to test with.

The Holoframe and Clip-on Glasses

The Holoframe looks like a regular gel phone case, and is designed to be used as one when you’re not previewing videos. When you do want to use it, just snap it off the back and clip it onto the front of your phone instead. It works in a similar way to other glasses-less lenticular screens, but uses the phone’s front camera to see where your eyes are and adjust the 3D effect accordingly. Previous attempts at glasses-less 3D viewing through lenticular screens required you to sit in a particular place; the Holoframe uses the phone’s processing to adjust the image, rather than you needing to adjust your seat. If you want this, you’ll need to buy the model that matches your phone. Only a handful of the latest handsets are supported.

It works, but the 3D effect was overall unsatisfying, I felt.

In fact, I preferred the stereo separation and depth offered with the included clip-on 3D viewing glasses, which work with any phone.

Moreover, use of the Holoframe requires a scene to be processed before you can watch it. The processing time depends on the length of the clip, but even a relatively short clip will take a minute or so. And if you move your eyes, the app will need to “capture” where they are before you can resume watching. It just felt like far more effort than it was worth. The clip-on glasses could be used without any additional processing time: it’s just a generic side-by-side 3D output.

Should You Buy an Insta360 EVO?

The main attraction of the EVO is the ability to shoot for VR. If you’re not sure you even want to do that, and are primarily interested in the 360-degree features, go for the OneX model instead. You’ll get better quality stitching, a removable battery, and a few other features like the ability to shoot bullet-time that aren’t found on this device. Consider the EVO mainly for VR video production, with 360 features as a little bonus.

The hardware isn’t perfect. The non-removable battery and flimsy plastic clips are annoying, but not enough to detract from the overall fantastic package on offer here. Finally, it’s feasible for everyone to produce good quality VR video content. Just don’t bother with the Holoframe. The included clip-on glasses are fine for previews on your phone. For the ultimate live VR preview, put on your Oculus Go or Quest!

Read the full article: Insta360 Evo: Now Anyone Can Make Movies for VR

The 7 Best Drones for Beginners

9 Ways Artists Can Grow an Audience Without...

What Is Shutter Priority Mode? Why and When...

5 Reasons Why Electro-Acoustic Guitars Are Better...

The 2021 Creative Communication Award Is Now...