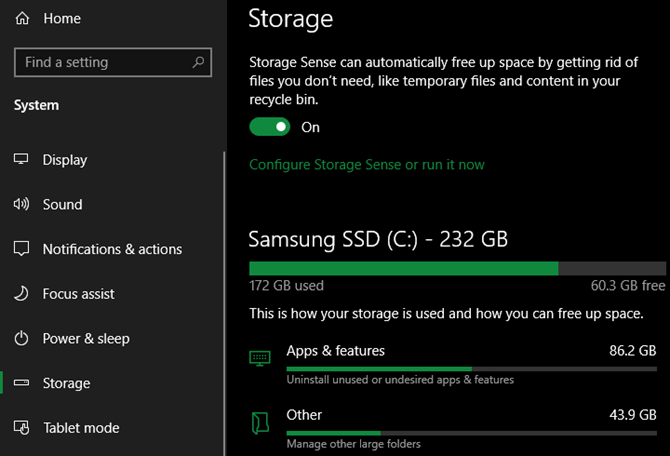 At some point, everyone wonders what is slowing their computer down. Working on a slow computer is no fun at all, and lowers your productivity.

While all computers slow down over time, in many cases, your own behavior can cause your computer to run slow unnecessarily. Here are common mistakes that will slow your Windows PC down to a crawl, and how to fix these habits.

1. Running Too Many Programs at Once

Over time, you’ve probably installed dozens of desktop programs. Maybe you use a variety of tools for different functions, or have a bunch of apps installed from years ago that you forgot about. Running too many apps all the time can lead to your computer slowing down; see our deeper look at why installing software slows down your PC for more info.

The biggest issue comes from programs setting themselves to automatically run in the background. This means that they’re eating up RAM, even if you never use them. To combat this, keep an eye out while installing new apps. If you see a checkbox similar to Automatically run [app] when I start my computer, make sure you clear it.

Instead of closing programs every time you boot up, you can prevent programs from running at startup altogether. On Windows 10, open the Task Manager using Ctrl + Shift + Esc and click More details if you only see the basic interface.

From there, switch to the Startup tab and you’ll see everything set to run when you log into Windows.

Take a look at what’s here and disable any programs that don’t need immediately upon booting your PC. We’ve looked at common startup programs that slow down your boot time if you need an idea of what to remove.

It’s classic advice to reboot your PC when you have a problem. But restarting regularly is important even if you’re not troubleshooting an active issue.

You might be tempted to never turn your computer off, so that you can quickly resume where you left off next time. But this is a bad idea and can result in your Windows computer running slowly.

The main benefit of restarting from a performance standpoint is that doing so flushes your RAM. Because RAM is volatile, it starts anew upon every reboot. If any programs you run have a memory leak (meaning that software takes RAM but then never returns it to the available pool), restarting will fix that temporarily.

Related: Why Is Google Chrome Using So Much RAM? Here’s How to Fix It

Windows also installs system patches, which can fix performance issues, when you restart. Of course, Windows 10 will eventually try to force you to reboot to apply updates. But if you don’t reboot for long periods of time, your computer will go without the latest security fixes and performance benefits.

In most cases, you don’t need to reboot every night. Aim to restart your PC a few times per week. At other times, you can put your PC to sleep or use hibernation to quickly resume what you were doing.

Next time you find your PC running slowly, you should consider how careful you are when clicking online. Unfortunately, many websites are a minefield of harmful content. Fake download buttons, giant ads that lead to shady sites, and all sorts of other nonsense can introduce problems to your computer.

Even legitimate downloads aren’t always safe. While it’s not as big of a problem as it once was, many free programs try to foist junk third-party software on you with pre-selected checkboxes. If you click Next without thinking, you could end up with extra trash on your system just from installing a few useful apps.

In the worst cases, this can even lead to malware getting on your system. You can open yourself to infection (and a slow computer) by opening a malicious email attachment that installs spyware, or similar.

The lesson here is to make sure you always know what you’re clicking on. Take the extra second to confirm you aren’t missing a hidden checkbox or clicking on something that’s dangerous. This will keep garbage off your PC that only serves to slow it down.

4. Not Maintaining Your Computer

Windows 10 is better than ever at taking care of some maintenance tasks on its own. But it isn’t perfect, so you’ll have to perform some basic tune-ups every once in a while. Making sure you take care of these could be the difference between your laptop running slowly and working at peak performance.

Below we take a look at a few routine highlights that pertain to speed; these are just a few of the Windows maintenance tasks you should do more often.

As your system works, it builds up files that are only needed for a short time. This is a normal part of computer operation, but if you let these files pile up, they can start to take a toll on speed after a while. This is especially the case if you have a small SSD that fills up quickly.

You can head to Settings > System > Storage to turn on Storage Sense, a Windows 10 feature that helps you free up space automatically. For additional options, search for Disk Cleanup in the Start Menu.

While your antivirus is likely set up to scan on a schedule, it’s wise to get a second opinion and scan with a dedicated anti-malware app occasionally. Malwarebytes is a great choice for this, since the free version only scans on-demand. It’s much better to catch malware with a scan than to find that your computer is running slowly weeks later.

Aside from this, Windows has some other scans you can run for maintenance, but you shouldn’t need to do so often. These include chkdsk and sfc.

The check disk command, or chkdsk, scans your hard drive for bad sectors that can cause your computer to act up. If you have an SSD in your machine, this isn’t as pertinent. But if you notice a sudden slowdown and still have an old HDD in your computer, it’s worth a try.

System file checker, or sfc, is a similar command. This scans Windows system files and attempts to repair any that are corrupt.

Read more: What Is the Difference Between CHKDSK, SFC, and DISM?

Typically, you’ll run these commands when troubleshooting an issue. But doing them every month or so can help you catch problems before they get worse.

We mentioned restarting to install Windows updates earlier, but it’s still a good idea to go to Settings > Update & Security > Windows Update to check for updates manually every once in a while. Doing so makes sure that updates aren’t stuck.

You should also take the time to make sure the software you use regularly is up-to-date. Using the latest version can introduce speed improvements not present in earlier builds.

This can happen even with a blazing-fast computer that’s otherwise in perfect shape. Read our guide to problems that can slow down your home network to get some ideas on what the issue is.

Now You Know What Slows Down a Computer

We’ve taken a look at common user behaviors that can cause your PC to slow down. If you’ve made any of these mistakes, now is a great time to change your ways based on the advice provided.

Eventually, all computers do slow down and need a replacement. But until then, you can use these tips, and more advanced advice, to regain some speed.

How to Get Google on Your Roku

How Many Security Vulnerabilities Are There and How...

How to Find The Bitlocker Recovery Key in...

5 Reasons You Should Get An Unlocked...

What Is an SEO Specialist and Could...