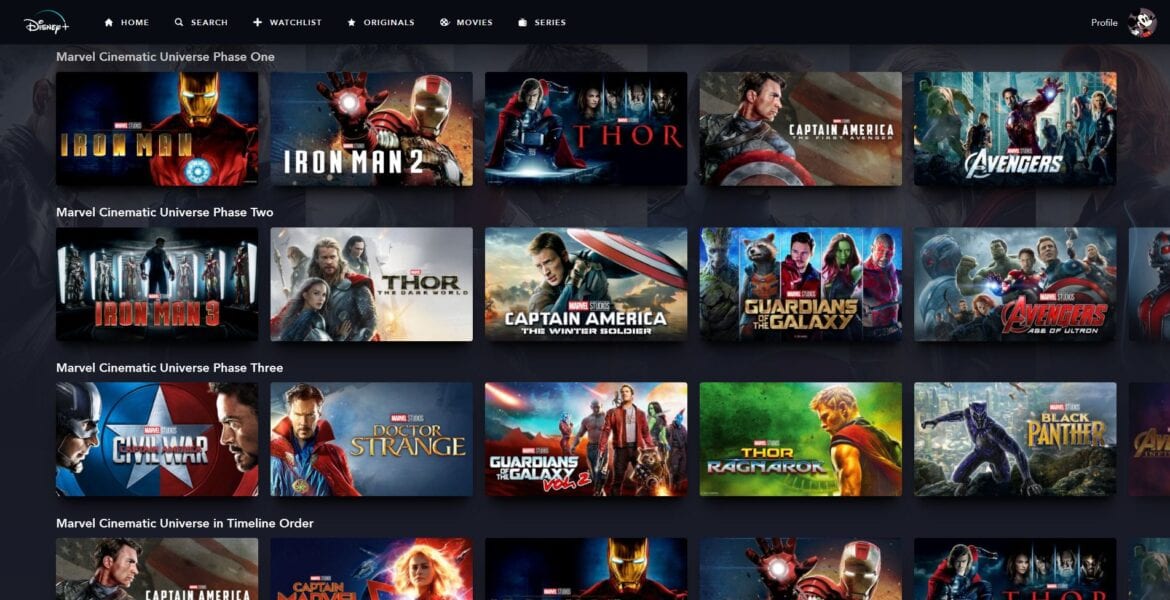 Disney+ launched in November 2019, so it’s still a youngster in the streaming world. That said, the service is doing its best to catch up with competitors.

Now, it seems Disney has finally decided to sort out the way it presents its franchises, as all the Marvel Cinematic Universe movies are now logically organized into categories.

What is the Marvel Cinematic Universe?

First, a bit of a recap for those not in the know: the Marvel Cinematic Universe (MCU) are a series of superhero films based on characters like Black Panther, Captain America, and Thor.

Although Marvel produced films before it, the MCU as it is now known began in 2008 with Iron Man. The company had high hopes for the film’s performance, but Iron Man exceeded its expectations.

Over the following years, Iron Man was joined by the likes of The Incredible Hulk, Thor, and Captain America, before cumulating in the epic coming together of characters with 2012’s The Avengers.

The MCU is split up into different “phases”, each with an overarching storyline. For those who dip in and out of the films it’s not a big deal, but Marvel fans take the timeline and canon very seriously.

Until now, all Marvel films had been lumped together on Disney+ without much thought given to the organization. That’s no longer the case, as all MCU films are now split into distinct categories.

The new categories are:

You can see these wherever you watch Disney+. Just head to the homepage and go to the Marvel section.

Easier to Discover What Disney+ Offers

It’s great that Disney+ is making these changes to the platform. While it has a wealth of great archive and modern Disney content, it’s important to make it as easy as possible for people to find what they want to watch. The more users have to fiddle around in search menus, the more likely they are to give up.

Of course, there’s way more than just Marvel on Disney+. There’s The Simpsons, Pixar, and Star Wars to name but a few.

Facebook’s Oversight Board Will Determine the Fate of...

How to Outline Text in Photoshop