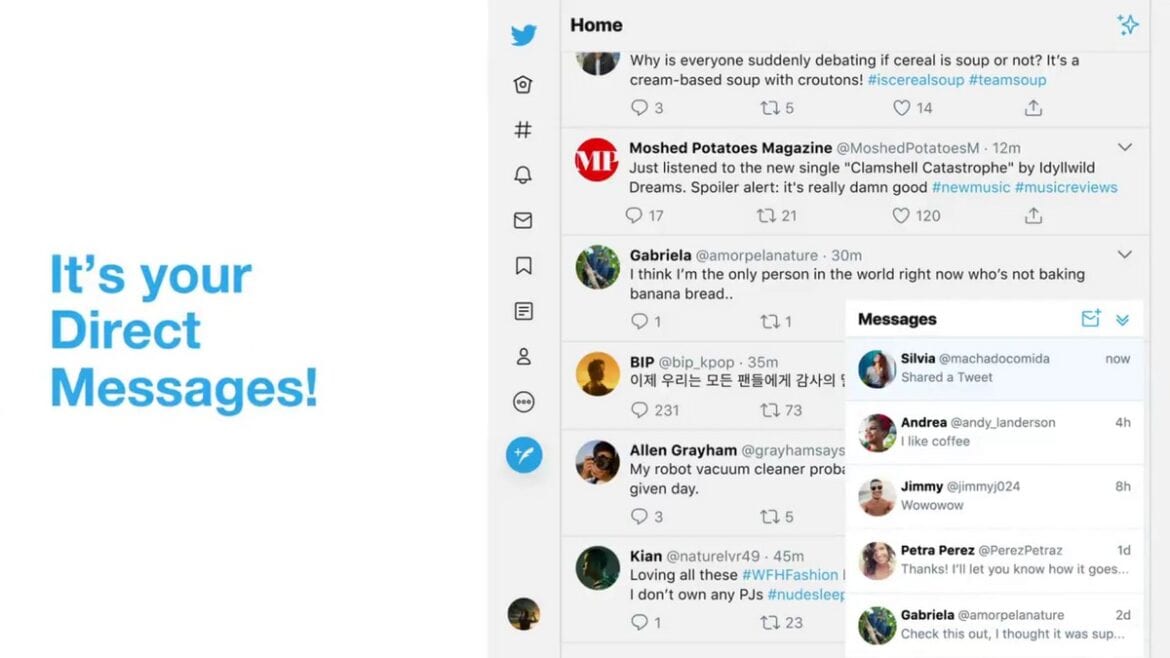 If you use Twitter to send and receive private messages, you should find Twitter’s new user interface useful. The new interface makes it a lot easier to access your Twitter DMs, allowing you to read and respond to them without navigating away from your main timeline.

Previously, your Twitter DMs were hidden away in a separate area of the Twitter website. Which meant that if you were browsing your timeline of tweets and wanted to check your DMs you would need to open a new tab. You would then need to do the same to switch back again.

Now, Twitter has rolled out a new interface which lets you slide into your DMs without leaving your timeline. Instead, you access your DMs in a popup window in the bottom-right of your timeline. With both your DMs and your timeline of tweets visible at the same time.

Slide into those DMs without clicking away from your timeline.

Rolling out on web. pic.twitter.com/BdaeYoyPu2

Twitter’s new interface is now available on the web for anyone visiting Twitter.com. There’s no word yet on whether this same interface will be available on Twitter’s mobile app. However, given the limited space available on smartphone screens we suspect the current row of tabs will remain in place.

Either way, this new interface mirrors what you’ll find on Facebook and LinkedIn, with Twitter clearly hoping more people will make use of its messaging feature going forward. Unfortunately, that means some people will slide into your DMs without being invited. Which is why you may need to use Twitter block lists occasionally.

Unfortunately for Twitter, it launched its new user interface at the same time as unknown parties were scamming Twitter users out of Bitcoin by tweeting from accounts including @BillGates, @elonmusk, @JeffBezos, and @kanyewest. Which meant this useful little update flew somewhat under the radar.

This should prove useful to anyone who uses Twitter’s messaging feature regularly. But it could also inspire more people to use Twitter DMs to privately message people on the social media site. If that’s you, here’s everything you need to know about Twitter DMs.

Learn the Art of Professional Photography With 38 Hours of Expert Training for $39.99

The 6 Best Fashion Apps for iPhone and Android

Become a Project Management Expert With This Course

5 Guides to Start a Side Project and...

Synology Launches Its Own Line of HDDs Alongside...